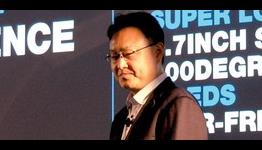 Digital Foundry:
For Digital Foundry, GDC 2015 ends as it began - in the company of Sony's president of worldwide studios, Shuhei Yoshida, and getting to grips with the firm's Project Morpheus VR demos. It's been several days since we first went hands-on with the London Heist experience, during which time we've enjoyed Crytek's Return to Dinosaur Island and WETA Digital's Thief in the Dark demos on Oculus Rift, and of course, Valve's immense HTC Vive-powered 'VR cave'. We've experienced the high-end of VR by the best in the business running on simply immense PC hardware. But what's clear is that thanks to Project Morpheus, console gamers aren't going to miss out, either.

VR doen right should be a huge leap for gaming. Very interesting read.

Ok, now I understand how they got to 120fps on Morpheus.The software calculate the entire frames sequence on each render load and store them in memory.

During the calculation process, each frame is numbered from the first frame to the last frame.

After that, the software will hold all middle(odd numbered) frames in to memory, and as soon as the render is executed on the screen, the middle frames that were held in to memory are displayed in milliseconds after the original middle frames is displayed on screen. I think that's how thy got the re projection to work.

Lucky for Sony that the PS4 had fast ram under the hood to accomplished this 120fps trick.

It's not caching and numbering frames until after displaying them. Caching 4 frames ahead of time would make for awful latency.

It's taking real frames and temporal projection data to calculate additional frames that slot in between them.

Ok, How does the software know which frames are the middle frame? There has to be some type count system for it to know that.
Caching 4 frames ahead of time? Don't know what you mean by that.

I never said anything about Caching 4 frames ahead of time.

I use a similar idea that often used in Traditional animation to draw my conclusion. Its called "animating on twos"

The fact that they mentioned that the 120FPS trick takes very little hardware power to run as well as the fact that they said its a trick tells me the frames aren't fully displayed(or rendered on screen) the way it suppose render frames on screen b/c that would defeat the purpose of calling it a trick in the first place.

That said, they've use a short cut system to have the middle frame cut in between the original frames as it renders. The PS4's fast ram the only way this can be possible because of how fast it is.
http://en.wikipedia.org/wik...

Key word "calculate" you said it I didn't. So my question is, what exactly is it calculating?

They mentioned in the Digital Foundry post that it's pretty much the same idea as what Oculus, Nvidia and AMD have been developing in "asynchronous time warp".

After the frame is rendered, it can be stored in a buffer and then use the sensor data from the HMD to interpolate a new frame based on the buffered frame.

Basically, after the frame is done and buffered, it's done. All the heavy computation from the CPU and GPU that were needed to produce that frame is done, and since all the data is stored, you can reposition the game engine's camera, update the display and have a (sort of) new frame to fill in the gaps.

Like you said, The 120fps trick happens right after the render process is completed, which I agree.

The software just helps with the organizing of the frames/placement, and the CPU/GPU handles the rest.

Reprojection works for 60 and 120hz according to this article. The software uses data from the HMD to create another frame at a rate of 120Hz. If the frame is dropped or not there, it will provide one based on the data it has and your movements. Therefore with reprojection there will never be drops in FPS. It's always locked at 120.

Of course none of this matters unless you have the panel that can refresh at that rate.

Such a great interview. VR should be exempt from fanboyism.

I really hope they decide to make a game where you're in a wheelchair and you can move around by rolling your wheels forward at the sides of your chair and gripping the wheels by pressing the triggers.
If you want to move 'right' then you would pull the right move controller and move the 'left' one forward, just like in a real wheelchair.

Then you could have a realistic way of moving around and rolling down the street and opening doors and going into other rooms inside the game.

Imagine you wake up in a mental hospital and you can't move your legs (in the game) and you're just rolling around and finding things for your inventory and getting scared to death with the 3d sound and lighting inside the game. The possibilities are pretty awesome to think about.

I swear, I'm buying the Morpheus on day 1.

imagine that, all this actually makes sense and seems possible after a simple interview with the creators/designers

BUT WHAT ABOUT ALL THE DOUBTERS???

WHAT WILL THEY DOUBT NOW?

i know its not going to happen but i wish MS and sony stays out of this and concentrate on making great console games i can play on my tv .

i would love time crysis on vr