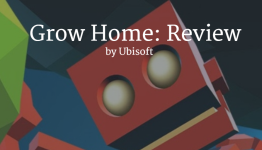 Grow Home, is what can only described as a platformer/explorer game. It's been created rather quietly by a studio called Reflections, which apparently operate under Ubisoft, and has been published under Ubisoft. The game is another of Ubi's indie titles that's been developed in Unity, and has very quickly gained critical acclaim.

But all things are not great, as the review clearly points out as it unfolds.

Adhttps://store.steampowered.com/app/1488200/Symphony_of_War_The_Nephilim_Saga/?utm_source=n4g&utm_medium=native&utm_campaign=sow_n4g_native&utm_content=png
- Comments (0)+ Comments (0)
TopNewestOldest
The story is too old to be commented.
80°3

Ubisoft will let you transfer your Stadia purchases to PC

Ubisoft is Moving To A $70 Price Point For AAA Titles

Game subscription service Ubisoft+ is free from now until October 10