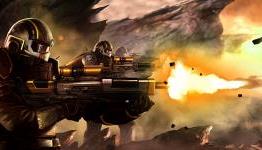 EGM:
The twin-stick shooter is one of gaming’s oldest game types—and one of the hardest to make stand out among its contemporaries, especially given the genre’s recent resurgence in the Indie scene. Helldivers’ unique metagame feature, though, helps separate what would otherwise be a rather generic game from the pack.

Helldivers puts players in control of a run-of-the-mill soldier fighting for the glory of the unified Super-Earth. Ruled under one “managed democracy”, the inhabitants of Super-Earth feel it’s their duty to expand and spread the message of this way of life to all they come across in the universe. Several races, however, wish to stand in the way of Super-Earth’s all-powerful government, so conflict erupts on an intergalactic scale.