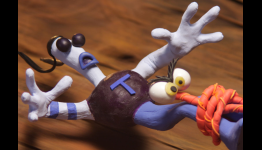 Armikrog’s claymation style is screwing with my head | Gamesbeat

GB:
It’s the weekend before Game Developers Conference, and I am hunched over my monitor repeatedly wiping the time scrub on the Armikrog trailer over the same few frames of animation. My eyes are locked on the star of Armikrog (coming to PlayStation 4, Wii U, PC, Mac, and Linux later this year), an alien who has crash landed on a strange planet, crossing a room where light from a window is bouncing off of the contours of his body. With each pass of the walk cycle, I become more obsessed with that damned light.

I love point and clicks when they are done right. I've been ready for this game for a long time!

It's cool to see games of this variety to fill that need for niche titles.
It's not my style, personally, but I'll definitely watch a Let's Play of it at some point.

It's not my style either, but I think I'll give it an opportunity on Wii U. Looks like a cool game to play with the Gamepad while lying on the bed, resting a little bit.