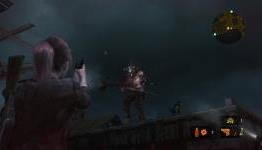 Gamespot:
Resident Evil: Revelations 2 sets you down the same path at two different points in time, playing as iconic characters Barry Burton and Claire Redfield. In the first episode, Claire is stuck on an island that's under the control of a devious overseer, who subjected her and her companion, Barry's daughter Moira, to a veritable gauntlet of violent and deformed monstrosities as they tried to make their escape. Barry arrived six months later, hoping to rescue his daughter, and when he landed ashore, he befriended a mysterious girl named Natalia who can see enemies through walls, making her a very useful companion indeed. Even though you ran through the same locations twice, once as each party, different weapons, enemy types and companion abilities were enough to stave off repetitiveness, even if the latter wasn't always used creatively at all times.