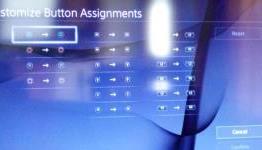 PS4 Firmware Update 2.50 Will Let You Use Circle to Confirm

We're a bit backwards in the West – and not because One Direction keep getting to the top of the charts. If you think about the symbols on the DualShock controller, circle was clearly intended as a confirmation button, while X should be used to cancel. However, time has taught us to switch these commands around – even if the fine people in Japan do things the "right" way

Im in the U.S. And I import games from japan from time to time. I swear that circle to confirm would get etched in my brain because of the games I get are RPG which means time intensive games so after using that circle to confirm for so long and then go back to a regular US region game it throws me off hahaha! So if this feature is true I just might switch for circle confirmation it feels "right" for me.

I bought my red PS3 in Hong Kong, so it's an Asian/Japanese model, and the whole circle-confirmation thingy is pretty much hardcoded in there, so it takes a bit getting used to, especially when you're used to western consoles (360, other PS3, PS4, PSVita, etc), plus occasionally a game overwrites the hardcoded controls, or the on-screen buttons differ from those you're supposed to press.

So yeah, it can be a bit confusing at times, so it's nice if there's an update for the firmware (hopefully not just PS4 but also PS3), which allows you to choose your own preference.

Now, if only they would allow to pick different languages in the different PS Stores. My PS Store in Holland is in Dutch, and Dutch only, but I prefer English.

how much more arrogant can you get to call the Japanese as "has it backwards" and even use a Japanese made game to express it too? it's a Japanese game on a Japanese console and you're calling them backwards? SMH

I agree with Badz.

It's on a Japanese console and that's how they do things. If anything, the constant error made sure you didn't do anything stupid like delete your save file unintentionally.

Don't know if I could get use to that. Well if they ever get rid of invert y axis I'm screwed.

@XBL its part of their culture.... O means to move forward.... somewhere some kid it saying no its Hugs and kisses...

Yea i Def played alot of import games growing up so I could give this a go button mapping and lay outs are rarely an issue with me like going back and forth from PlayStation AllStars and Smash bros. Or Borderlands and then playing PlanetSide 2 right after While alot of people I play with need a few mins for their muscle mem to kick in.

I have an imported Vita but use EU and AU copies of games and PSN accounts. Things can a bit confusing switching between XMB and games. The hardware is pretty much the same regardless of where you buy the consoles/handhelds anyway (I think the confirm/cancel switch is one of the few things they do change).

last time i remember hit circle button as conforming was in FF7, since 18th year.

it's been long time circle button ^_^

This is amazing. I can make every shooter control layout "Bumper Jumper" so happy right now.

Please tell me they are adding this to PS3 too.

This little option should be on every console.
It's a small little thing, and yet such a great change.

Wow that's amazing! If they let you make custom controller layouts and it carry over to every game.... That's just wow.

plex is crap and to use it on ps4 costsd £3.50 a month in uk.
also it doenst play all files raw it changes them.

...but no basic sorting options?

I mean, Christ, even the old DS let you make folders.

Whatever happened to the camera while chatting?

Oovoo is also coming out as an app

This will be nice for games that have weird controls that don't allow you to change in game.

Haha, this reminds me of my days playing MGS3.

People. Making custom button maps for your controller will break as soon as a game mentions the controls, unless it includes an overlay that reminds you where you switched each button to. This will be an OS-level feature.
On the other hand, the playback controls for discs (on the US PS4 at least) still uses circle as play and pause, so this is probably just a holdover from when it was originally designed in Japan before being converted to our contrary tastes.

I'm a playstation MVP and I dont understand how,why or who is leaking info that sony trust to us. Man because one or two a holes we are getting a bad reputation. I hope sony finds the guy who leaked everything and ban him for a year.

I think the beta should be available to anyone who wants to try it and maybe MVPs should get access to a alpha.

I think that would be good but its not and everytime sony trust in us there is always one MVP leaking the news on neogaf. I dont like it because sony one day will stop supporting our program. Its like some of us dont read the NDA agreement.

Firmware is being beta tested. Leaks are from the beta.

Which is only being beta testing by us MVPs thats why i said i dont understand why are they leaking info that sony is giving us before all others.

Get off your high horse and stop trying to act like a badass because you're an MVP. You're not special.

It's nice that they give us options but my mind will always think the triangle and circle are cancel, while square and cross are accept.

There are bigger fish to fry instead of changing around buttons

being use mostly aian and japanese playstation in the past and have to go with NA PS4 version, this is godsend feature for me, X and O swap all the way to the next gen

but i wonder, do the button promt in the screen will change when i swap button, something really pain in the past for me when some game promt a button to tell you what to do in the screen but infact you have to input different button because of you using asian machine to play NA game

I see this working best for remote play. games like shadow of mordor and dragon age inquisition have main functions tied to the rear touch pad. if the suspend is only when you put the console in low power most that will be a little disappointing. suspend on the psp go is more what I would like from it, you could suspend one game and start another and continue on your suspended game once you was done. it was great for games that didn't let you save freely or had check points far apart or if you just had to stop playing for some reason.

Is this really a big deal? Weird.

i agree , the only time i've ever had issues with button layout is going from console to pc and the layout wasn't what i was accustomed to using , but hey option are a good , and its certainly a unique idea .

this is a massive deal. no more terrible control schemes we have to suffer because the devs don't know how their games should be controlled. for example in shooting games i like using L1 and R1 to shoot but devs force L2 and R2 to shoot or GTAV were X should be the driving button just like the old GTA games. in all honesty this was needed back on PS3 ea were devs forced L2 and R2 to drive and shoot because of straight ports from the 360. i still have nightmares using L2 and R2 to drive a car in Saints Row as triggers on PS3 were beyond awful. this is actually one of the better features Sony are planning.

Sorry but that's pretty silly to me, and this article doesn't imply that you'll be able to change a game's control scheme anyway.

Awesome news for me! I have a region 3 PS4, I always mess up between pressing X or O in game menus since my PS4's UI uses O to confirm.

I bought a Japanese PS4 specifically to get O as the confirm button. Now I just need to buy locally to get replacements.

Good that they give you the option to modify this.

Now I can make my PS4 fully Japanese !!

Well it's a start, for too long now it's always been so unclear as to why developers/publishers have always been so scared of letting console gamers remap everything to their own configurations, PC has of course enjoyed this simple feature for eons now.

So from this one screenshot it would appear that you can only make changes once. My assumption comes from the fact that you can "APPLY" the changes rather than "SAVE" them. What I mean by that is that once you change X = X to X = O, it will stay that way in every game until you change it back.

The next obvious step would be to allow multiple configurations that could be saved and assigned to games as the gamer sees fit, but I know at this point I'm probably pipedreaming. But progress is at least still progress.

Custom button mapping is such a big deal, there have been so many occasions where I've wished I could have a different layout but the games developer doesn't provide one.

This is absolutely brilliant. Bring to PS3! Please?

x is confirm, O is cancel, the world needs to adopt to that

It's not just O and X though, you can remap all the buttons.

Agree 0Disagree 0
▼✖-+
SPAMInappropriate
Show all comments (55)
The story is too old to be commented.
40°

The 2D roguelite adventure "FALLING OUT" is coming to PC and consoles on October 6th, 2022

Open up your own cosy bakery in Lemon Cake