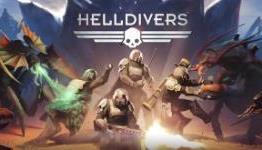 Tom Reeder, GIZORAMA - "Helldivers is a top-down, shoot-em-up wherein players take on the role of a Helldiver, a soldier in a futuristic war with three alien races. The plot is unimportant to the gameplay and barely present at all. As a Helldiver, you fight for your home planet against alien hordes that seek to destroy humanity. However, this very basic platform serves as an interesting set-up for the game’s systems. Players are not just completing missions to advance their own game, they are advancing the whole war being fought by all the players. Zones on the galaxy map are shaded in as planets are completed and enemies destroyed, giving a sense of accomplishment to the game’s endless grinding. When a player completes all the missions on a planet, they gain influence which not only increases their stance on the game’s leader board but also contributes to the overall progress of the shared world. It’s an fascinating system. Whereas in a game like Destiny I would have liked a more fleshed-out story and world, Helldivers never tries to sell itself as a game with an interesting story but instead it is confident in it’s role as a really hard game about fighting aliens."

Most fun I've had playing video games in a while. Its amazingly engaging when playing with other people. Can't recommend this enough.