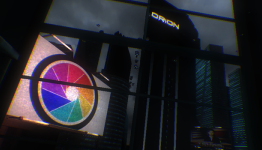 VRFocus- Previously VRFocus has reported on cyber punk videogame Technolust. The title started as a Kickstarter campaign which ended up doubling its $30,000 USD goal. Now it has come to light that IRIS VR has earned more from pre-orders than it has from its crowd funding campaign. The title is due to be compatible with the Oculus Rift head-mounted display (HMD).