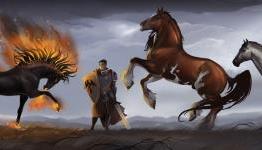 Crowfall, an ambitious MMORPG led by industry veterans Gordon Walton (Ultima Online) and J. Todd Coleman (Shadowbane) managed to meet its initial goal of $800,000 in just three days when they launched their Kickstarter. Now roughly a week after succeeding in its initial goal, Crowfall has gathered another $200,000 in funding. With $1 million raised, the initial stretch goal for fundings toward an FX Artist has been met.

To thank backers and to encourage new ones, the team at Crowfall have now added new backer stretch rewards. Now at 10,700 backers, Crowfall will be giving backers of every level an exclusive in-game All-Father statue once the project hits 12,000 backers. Players will be able to display the statues in their Eternal Kingdom to show their backer status once the game launches.

Adhttps://www.releases.com/?utm_source=n4g&utm_medium=native&utm_campaign=c1
- Comments (0)+ Comments (0)
TopNewestOldest
The story is too old to be commented.
100°6