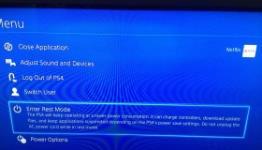 Apparently the firmware is being planned for a public release either later this month or sometime in April.

Adhttps://store.steampowered.com/app/1488200/Symphony_of_War_The_Nephilim_Saga/?utm_source=n4g&utm_medium=native&utm_campaign=sow_n4g_native&utm_content=png
- Comments (80)+ Comments (80)
TopNewestOldest
Expand all
The story is too old to be commented.

Funny that these features for me are better than the one in the title.

Wait, deleting 0% trophies hasn't been a thing? As a self-identifying Achievement Whore, I would have died if the X360/XO didn't offer that feature...

However, I would much rather Sony/MS give you the option to delete the progress of any game, and take the achievement/trophy progress with it. That one time I played Army of Two at a friends house and made the mistake of using my personal account? Yeah, now that progress is stuck on my account... -_- Joy.

Damn I just started creating a video from SharePlay. Maybe I should wait.

I'm looking for a feature that says 'not enought trophies '
Hopefully this kick ass feature will be implemented soon.

Suspend/Resume will be good for me when I'm right in the middle of a fight or something and HAVE to stop. But I'm actually excited about the deleting trophies with zero percent. I've tried too many games that within minutes I knew were not for me. Wiping them from my record will increase my completion ratio.

i want to delete my 6% baby video game trophies

@Ali-I don't understand. Are you talking about trophies/achievements that have neither gamerscore attached to them nor raise your trophy level? @Redbutterfly- If that's what you all are talking about and there's a way on Xbox to delete them, how do I do it?

At last deleting those games with zero percent trophies.

Sony are just killing it with the features. Share-play is just awesome and it's getting better.

Deleting 0% trophies is an amazing feature. I've been wanting them to implement that for a long time.

I think this was already a feature on the Vita. Hiding not deleting 0% trophies.

I got a disagree (a few mins later) I guess some people don't want these features?

You have my vote. I want everything on that list, especially friends list sort, and appear offline. Sony said they don't have as many updates because of criticism on PS3. They were criticized because many updates were under the hood, stability updates. Now, we have to wait several months between updates on PS4, with many features still missing over a year after release. Instead of trickling out features over time, they wait for a handful together, and still end up leaving out useful things like folders or a media player, both if which were on PS3 8 years ago. Then you have people above saying deleting 0% trophies is an "amazing" feature. AMAZING. If you don't stay on top of the manufacturers behind your beloved electronics, they won't improve. These updates have much, much room for inprovement, and being complacent and saying Sony is killing it with the features, helps out none of us.

I still can't believe we don't have this yet. It's so basic, and still, so useful.

With the exception of the one that looks like a hands-free for a mobile, all of the official headsets run over RF. (I think) Hence the USB dongle.

Nope there are some alright ideas...Hopefully they leave out the DLNA, I don't steal movies so it doesn't effect me...It's not heartbreaking that with new anti-piracy measures in Sony movies that they can't be watched on a console without being streamed....

Yea those would be some nice features to have added on...especially th e appear offline option. Sometime I just wanna game wit out get a ton of game invites to stuff I'm not playing at the time

Maybe they'll add some of the features in a bigger update.

Bluetooth support for PS3 headsets is awesome for me. I bought the camo one less than a yr before PS4 came out and it sucked not being able to use it. This is great. No more talking through the camera and hearing ppl through the surround sound.

Also they said this video chat was a thing. something called oovoo.
http://www.dualshockers.com...

Sweet! Love this feature on Xbox One, been waiting for it to come to PS4. Can't wait!

Hope so. It was One of the main features that was advertised for the system. Anyone know when spotify Is coming to ps4?

I really hope they add offline mode so that i can watch netflix without having to tell my friends im busy and cant join a party.

Folders is a must!

Cant think of anything else major right now besides those 3

Looks like Spotify is coming on the 29th of March. I say that because that's when Music Unlimited is closing and most likely will be on or before that date.

end of month as far as i know dude.
i know music unlimited ends on 29th march so im assuming its gonna be replaced straight away.

I'm watching Netflix then come a few invites to join Destiny or Diablo 3. It's annoying.

Or those people who don't realize you don't want to play what they're doing (say you're leveling up a new character in destiny) and invite you 100 times over, blocking the radar, I feel ya man

Ever since I discovered Spotify, can't use any other music player. Sooooo good for premium users. Nice touch for the PS4.

How do I become a mvp member

Click the link and apply. If the team thinks you have something to offer, they'll give you a shot. If you're just a fanboy don't bother.

Disagrees cause....?? He gave a valid link and stated there's criteria for being an MVP.

Killagram, don't bother. There are some really pretentious and borderline insane people posting on N4G if you haven't already noticed.

He's getting disagrees because his statement about being a fanboy is unsubstantiated. Here's the Terms of Use for being an MVP if you are interested, http://us.playstation.com/p...

The Community Management Team looks for passionate Playstation fans when accepting or inviting gamers to the program. "Fanboys" may indeed apply.

It takes 4 months for them to accept you

Nice, I hope we get some way to sort applications in the future... I want folders dang it!

It's about dang time! Suspend/resume is such a good feature to have. On another note how can I get in this beta program?

Looks like somebody is going to get done for breaking the NDA.

EDIT: The Tweet has been taken down, wow that was fast

So is this like the preview program but for PS?

PS4 owners will love the feature.

Works great on the Vita.

That's a great feature to have.

Cool but when are we getting Friends Notifications??

Agree! The delay in getting this is rediculous.

Yes! Can't wait!, will be so nice to skip load times and hope right Into it!

Why this is tagged with Screamride?

very cool , its a great feature of the xb1 and i really miss it when playing ps4 games

Nothing they do can top share play. I use the h*l out of that feature.

I'm expecting lots of trouble. As usual when they release a big update.

i hope this turns out to be true, it is a well needed feature

Good. Now people can stop whining about this feature.

i wish you could change your name like how you do on steam. for whatever reason they won't let you change your name permanently, so they should let you make an alias that hides your "real" psn id.

If the "appear offline" option is real I will be thrilled, I have longed for this option since the release of PS3. No more unplugging from the router when I want to play single player.

i want to be able to delete any trophies. there are so many trophies were i have 1% its really annoying me especially as most of those trophies are on PS3 and i've sold that so i can't do anything to change them. also give us PS1 and PS2 emulation as i'm not even bothering to use PS now.

best features on the best console! I thought there was another thread a few weeks ago claiming we have all been mislead and Sony gas dropped ball due to no suspend resume feature. I love it when crow is served and that they are permanently owned and proven wrong

I just want ability to use EXT HDD.Give me that and I'm happy.

For those that didn't know, you can hide trophies lists on ps4. Anyway deleting them now is a lot better.

Can't wait for that suspend/resume. Just in time for bloodbourne too!!!!

years of play with vita spoil me too much with suspend/resume, it'll be great if they work like vita, sometime i'm too busy and leave my vita untouch for month (it ran out of batery too) then when i power it up, i can continue my game from extract same spot as you leave it, cool feature should be at launch