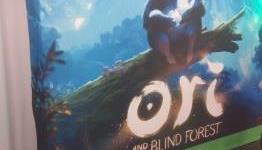 Microsoft unveiled Ori and the Blind Forest to the press, here's the review of the game

I played this today at GDC for about 30 minutes total. It's okay. I will buy it definitely to support this kind of game development and exclusivty.

However the game was okay/good so far. There's metroidvania elements in this game that is kind of a turn off since there have been lots of metroidvania games out so far.

If this game is a turn off. Don't play it. There are plenty of games out there that you might want to try.

83.6. Talk about precision. And for people criticizing remember this is a $20 game.

I was not criticizing if you think i was. This is a definite day 1 for me when it comes on PC because i dont have an Xone yet.

not a true review, is a preview score -_-
Review release only monday 8pm

I can't read French. Translation says 'Test' at the top doesn't that mean review? Also, if they've given it a score surely that means it's a review?

This looks like a really good game. What's with that silly review score though?

I disagree with the score. It should at least be 4.73

No it should CLEARLY be a 4.7685 these reviewers are novice at best if they can't tell that!

This is why alcoholics should not be reviewing games or at least be banned from giving numbered scores. 4,18/5 LoL see what you did Obama

What the hell are you babbling about?

I think he means the promotion & acceptance of open stupidity.

"Super smart" people can't even recognize when they are being trolled with a randomly thrown number score and think reviewer used it seriously.

Obviously you fail hardly at comprehension, so I'll explain it to you: the score is clickbait for anti review nazis.

i expect this game to be around the 8/10 range

game will have very high marks, and this is not a review but a preview.
Review arrive Monday the 8PM

Not surprising. This game looks amazing. I expect best reviews all around.

What a ridiculous score. Despite the typo, it's still ridiculous to see such a random score with no merit behind the scoring process besides throwing numbers out there.

Well its only one review so its difficult to tell if the game will be amazing or not. Something similar happened with The Order 1886.

Regardless I'm sure Ori will be a fine game.

Should of got a 4.19, do some people really think that way?

Here's the thing I don't understand people are leaving comments about this game especially ones that say they have played it. You may have demoed the game but that does not mean it was the completed version of the game. Also keep in mind that as it said in many interviews and even demos that abilities are gradually implemented in the game as a player goes along throughout the game. So realistically anybody giving the game any kind of reading right now if you have not completed the whole game from very beginning to and you have no right to give any opinion as it's not a complete thought. It will be interesting to see the conclusion of the game if the ending is as good as the journey is itself. I think it will be interesting and I think it's important to have these type of game still in existence as many things are three-dimensional nowadays they're only few games and platform or is that still embrace 2D gaming. Don't give me wrong I value the Mario games and Sonic games of yesteryear but at the same token, we definitely need creativity and I do believe this game has potential to do just that. It's a new character and a new story. So just give it a fair shot. Many people were surprised about how amazing journey was if you played at night everybody may agree that it was amazing that is left up to opinion but in my experience at least it was something amazing. And yes I have played the whole game more than once from beginning to end so I can give a complete opinion of the game.

It must be really inovative and the gameplay must be never seen before.

Well the multiplayer is loaded with modes. Almost 200 hours to finish, the replay value is huge and of course its not linear, its open world and you can go everywhere...

The double standard doing a review is really easy to do. I can forget many things and just say good things...