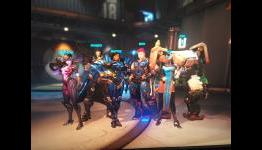 GameZone: "As you’re probably well aware, Blizzard held its PAX East panel today, and as expected it was filled with tons of exciting announcements and reveals. One reveal was for the developer’s new 6v6 PvP first-person shooter, Overwatch. It was a new map that goes by the name Watchpoint: Gibraltar."