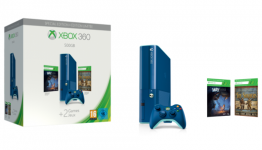 Dealspwn writes: Did you know that Microsoft made a blue Xbox 360 with a 500GB hard drive? Honestly this is the first I'd heard of it, since this limited edition SKU was released in fairly short supply.

However, one of the few retailers that still stock them are back in business for only £179.99. You'll get the azure console, controller and two free digital games into the bargain.

I'll level with you: you can get an Xbox 360 for much less than this. But if you absolutely must have the Blue version with its seriously decent hard drive, it doesn't get any cheaper than this, since they're otherwise going for upwards of £240 elsewhere.

Its funny that your name starts with blue lol.

On topic: I think it looks great.

There are those who collect color variants. I have a few myself but I am not that extreme as to get them from around the world.

there are some colors that are only available in certain territories. And the PS3/360 generation made it really difficult to collect for with not just colors differences but specialized models as well.

True, hadn't thought of that.

Can't decide if this is nice or not. That's usually irrelevant though, if it's rare, it may be worth something in the future.

i think i'm going to buy this.

Not going to lie, That is thee ugliest 360 color design ever created. But the price is a deal for 500gb

Edit: I just got a headache looking at the pic

Yeah, N4G has horribly compressed it!

Just bought one , Argos is the british version , I think it s bargain with to bigger HD too. Colours a shame but but I need a bigger HD and the black ones are £50 more. ooo weee