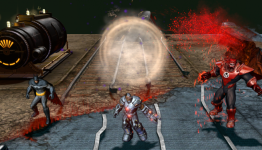 Next year will see the Dawn of Justice as Warner Brothers brings the Justice League to the big screen. A year is a long time though, so DC Comics fans can look forward to more games options.

This March 26th, Turbine will officially launch Infinite Crisis, available on Steam and directly from the site.

Hey Turbine why not launch Infinite Crisis on ps4 ,ps3
we like to play!!