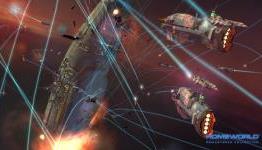 DS:
It's not often you get the feeling of true, 100% satisfaction. Homeworld Remastered Collection provides just that, for a couple of very good reasons.

First, the vindication factor. Homeworld was something of a cult classic when first released on PC back in 1999, as was its sequel in 2003; it was loved by those who played it, but it wasn't bought in huge numbers so never really got the widespread acclaim it deserved.