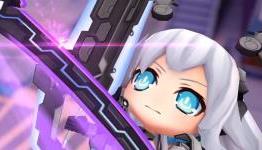 Stephen Riach writes "The Hyperdimension Neptunia games have gained a reputation for being some of the finest RPGs on the Vita. Given how RPG-heavy the platform is, that isn’t faint praise. The fourth wall-leaning series relies on gaming’s history both from the distant past and modern history to tell a story about territorial warfare. Much like how the console wars have raged off and on for decades, so to does the war between the pseudo-Sega, pseudo-Nintendo, pseudo-Xbox, and pseudo-Sony factions. Each is led by a leader known as a CPU, although here, things are turned into more of an alternate dimension kind of thing with this being a side story. - "