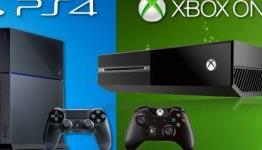 Comparing PS4 and Xbox One Exclusives Releasing in March

It's common knowledge that 2015 will be a big year for the console market, with games such as Uncharted 4: A Thief's End and Halo 5: Guardians looming on the horizon. When looking a little closer to the present, however, it's clear that March will be a massive month for Microsoft and Sony, with both the Xbox One and PlayStation 4 playing host to a variety of exclusives. For what it's worth, here is a comparison of just which games will suck your wallet dry over the next 31 days.

Adhttps://store.steampowered.com/app/1488200/Symphony_of_War_The_Nephilim_Saga/?utm_source=n4g&utm_medium=native&utm_campaign=sow_n4g_native&utm_content=png
- Comments (126)+ Comments (126)
TopNewestOldest
Expand all
The story is too old to be commented.

EDIT
What's the problem pedro? Does my enjoyment of March cause you to feel insecure?

EDIT 2 @ Magicite, Not sure what you consider "notable"? Is a metacritic score of 65 notable?

The article is not accurate. There are several games on the list that are not being released for the PS4 and one will also be released for the WiiU. Here is the corrected list of exclusive content for the Playstation 4.

Starwhal is coming out on Wii U.

No one bothered to check the accuracy of the article before you clicked the approval button?

Edit: Add LA Cops to the list for Xbox One

These games are not being released on the PS4

@i givehugs
Wait are you being sarcastic? Those titles ARE coming to PS4. Heck, Helldivers is my most anticipated game since last year, its coming March 3, why are you saying its not coming to PS4?

The only major game i see missing for playstation anyway is the show. Pretty sure it comes out on PS3 as well but not sure.

And funny thing is, it's the first month in a while where PS4 actually has quite a few titles (indies but still) releasing, rarely more than XO and BAM, we have a special article dedicated just for March releases + comparison. Ahhh...

If you read this note in the article, I state that games listed under "PlayStation 4" are true PS4 exclusives; the rest are listed under "Sony" because they'll be available on other Sony platforms (PS3, PS Vita, etc). Same goes for the Xbox One and Microsoft lists.

You're correct, those games are coming to the PS4, but they're also coming to some other platform, so they're not listed as true exclusives. Same for ScreamRide and Ori on the Xbox One - they're coming to the 360.

"Note: For the purpose of this article, I will list PlayStation 4 exclusives, Sony exclusives, Xbox One exclusives, and Microsoft exclusives as four separate categories"

I do thank you for your contribution, however, there were a couple of titles that I had missed, and for that I apologise.

They have done a good job of keeping things up to date so far.

Basically only noteable MS exclusive in 2015Q1 is Ori.

And I'll be playing that on PC since I'm sure any old PC could run the game just fine.

#IDARB, Roundabout, Riptide 2, and The Escapists have been a success.

Also, they continue releasing new characters for Killer Instinct, and there will be the standalone Forza Horizon Fast and Furious Expansion.

Add to that Screamride which is receiving very positive previews, Ori and the Blind Forest, and Neverwinter which has already shipped on PC and there is plenty of content in March not on the other consoles.

If you actually owned an X1 you wouldn't be saying that only Ori is notable in 2015Q1.

I know PS4 has a lot coming as well. But, your comment is blatant BS spouting out your fanboy ass.

Mate Xbox owners have had a steady flow of great games since launch. I think we will be right with a few slower months.

Screamride looks like something I'd be in to. Not worth buying the system for yet for me...still waiting on Quantum Break if I see better game play footage, which was a bit disappointing for me when they unveiled it.

I find these list hilarious, its obvious they are made for trolling reasons because there is absolutely no comparation between the two months for each console. Ps4 lineup DESTROYS X1 lineup, just like Ps Plus destroys Xbox Live when it comes to the monthly free games.

You can take those games back to the dust closet.

BioShock Infinite and Tomb Raider have already been on PS+. It should be named Games: They're Old. Nah, just playing... but PS+ offers brand new games a lot of the time, quality ones too.

Nobody said Xbox has more exclusives. Its just that PS4 is 90% indie wannabe mario games. And Xbox One offers More AAA exclusives that have quality.

@zeref That's a flat out lie and you know it. Here's a link to prove you wrong. It took me all of one minute to find. Stop spreading misinformation.

Zeref, people say that all the time. It baffles me how blind and stupid people can be sometimes. Saying the 360 is better because it sold better like it was fact. Yet the PS3 sold more than the 360 AFTER the year head start the 360 had. Now it's, PS4 has no games....Dude, I've got so many games I can't play them all. I barely sign into n4g like I used to because I have so many games I still need to complete.

90% indie mario wannabe games?! Get the hell off this gaming site you wannabe troll. I'm surprised you have 4 bubbles.

1) All my games I am talking about...not a single one is an indie game.
2) Even the multiplats are now better on PS4 (before you even start)
3) If you can't tell the difference between Bloodbourne and Mario, that is your issue. Why are you here?

Soooo.....sunset overdrive, Dead Rising 3 and what....Halo? scream quality.....AAA material....as If the other guys don't? Have you seen a PS4 exclusive? Does your fanboy goggles even allow that? Let's talk about Uncharted. God of War. Bloodbourne. F'ing STREET FIGHTER V (..and I'm a MK fan by the way) ...total indie games right? /s

Keep rooting for yourself though, Scalebound does look really good. poor_cus_of_games said it miles better than you did and he has 1 bubble.

And Yakuza Zero, if you know Japanese.

Trying to get them clicks huh?

Its a worthy opponent to Bloodborne :p

I meant Prepare to die.

The story will be on par with Last of Us. It's going to be epic.

Lol, yeah i thought that as well.

Yeah it's bad news when one of your major exclusives for your next gen console is a new Kinect game which I thought they'd removed now anyway, which also happens to be the sequel to a 69/79p Iphone app, that's out of this world innovation?!

You can't compare an indie game to a AAA real exclusive

But... Ori and the Blind Forest, man. I REALLY want to play that game. It looks amazing.

Granted, I'm still bloodborne and Toukiden kind of guy, but Ori will undoubtedly be awesome.

"You can't compare an indie game to a AAA real exclusive"

You can if you understand what AAA means.

Good month! We can't forget about those awesome multiplats. So March is looking great! plenty to play...

Im looking forward to State of Decay, Screamride, Ori and Neverwinter so I guess pretty much everything on the list. Plus WhiteNight is coming out and it looks really interesting to me. I'm sure there are a few more indies that are going to be released that we don't know about, Lovers in a Dangerous Space Time must be close and where is CupHead?? Haven't seen anything on that game forever.

On the Playstation side of things I'm looking forward to Helldivers but thats about it. BloodBorne looks really great but I've never been able to get into a souls game so I doubt it will appeal to me

Ori is the only game on that list I care about.

Same, i am really looking forward to it.

i'm also looking forward to ori,that game looks,sounds and plays like something out of a very good disney movien. The previews have also been really positive and i enjoyed the screamride demo so i'll be picking that up too.

Not like you've got much to choose from, honestly.

Plenty to choose from in march for both systems. Ori looks phenomenal.

On either console, Ori is the only game I care about.

But... These are not the only games on xbox. There are plenty of other games that have already been released. These are the games for next month.

Because you are to poor to afford PS4!?...SAD

Unfortunately nothing major (in my opinion Mario Party 10 and Mario v Donkey Kong Tipping Stars while undoubtedly very good aren't my thing) hits the Nintendo Wii U in March but then .... they start dropping ... Xenoblade and Splatoon to start! WOooooo!!

Going to be a good year for everyone!

Wait is there a western release date for xenoblade x yet?

and this is n4g aka n4disagree

Arghh ... looks like April is Xenoblade X for 3DS .... argh :( I've been wanting it for the Wii U and thought they were hitting at same time.

Bloodborne and MLB 15 The Show for me, can't wait!

Bloodborne may give me a reason to pick up a ps4

Also for Xbox ONe

OMG, I thought this was a joke, but it's a real standalone product.

Stuck between can't believe this is real, and maybe it might be good.

Looking forward to Bloodborne, and Ori on my PC

Glad to see you supporting Sony and Microsoft! Both should be great games.

I see what you did there ;)

Well, personally I don't care if my money goes to Sony or Microsoft. they are just big corporations to me, and this gen my preferred console just happened to be ps4 (x360 was mine last gen), that's not to say I won't look into xbox depending how Quantam Break turns out and especially that dragon game by platinum games. Anyhow my preferred platform remains PC, for a number of reasons including the control scheme of a keyboard and mouse, and yes I am lucky that Microsoft chooses to port some of their xbox games onto PC ori and Fable are very attractive

Lets be real other than Bloodborne and Helldivers no one is breaking down the door to play those other titles. Are they even available in the US?

You forgot MLB The Show!

Yeah, because people have already started lining up to get their copy of kinect fruit ninja right?

@johndoe
I know I am not but what does that have to do with anything.