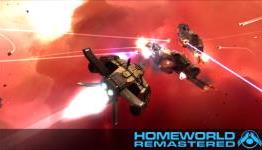 Why I’m Excited for Homeworld: Remastered

The recent announcement of a remastered version of Homeworld has me really excited for quite a few reasons.

For its time the graphics were really top notch, so I can't wait to see how its going to look with all those shiny new textures! :D

The graphics were good but I think the main reason it still looks good today is the art style - its really timeless and a ship from Homeworld really stands out from other sci-fi spacecraft.

I cant wait for this - torpedo friagtes and pulsar gunships FTW!

Yeah love the art style on this.

I was never really a Homeworld fan so it's going to need to be really special to get me to try it.

Star Citizen can suck it. Homeworld is the past and future of space sim.

Agree wholeheartedly with this statement :P

Homeworld it is not space sim.It's RTS.

All this nostalgia. Maybe that's why we like it huh? But the thing is Demonik, its never going to match up to your memory. Doesn't that just lead to disappointment?

I loved this game so much, even if it was a slight disappointement, I would still love it anyway.

Plus, on-launch modding support and new multiplayer netcode will ensure that there will always be a good time to be had!

What a bonus. You take a game, remaster it and make more money off it :P Well I suppose they did put the work in.

Remastering a game from 1999 is far better than remastering games that you bought just months before(Tomb Raider, Metro Redux and TLOU are good examples) and it's definitely better than making gamers pay publishers every month to stream old games to their new consoles.

I love the Homeworld Cataclym expansion but I have never played the first game. I don't know where to look for the game and if I do find a copy there's bound to be some technical difficulties when playing them on modern PCs.

If they are remastering a game made 16 years ago not only graphically but technically so that it is playable on modern PCs then I don't see anything wrong with it.

Never played it but it looks good. Would love to give it a bash.

I preordered this as soon as I was able. Homeworld 1 and 2 were some of my all time favourites and I was pretty heartbroken when I lost the discs. Thanks to Gearbox though, I can now (or very soon at any rate) relive my boyhood fantasies of commanding interstellar armadas.

My original Homeworld 1 CD is sitting right next to me (had to find it in a box once they announced the remastery).

Unfortunately I don't have the box, but at least I can try out the original before comparing the two! :D

Randy Pitchford: The magic behind Gearbox’s merger with Embracer Group

Resident Evil 4 Remake: A Closer Look at the Upcoming Feature