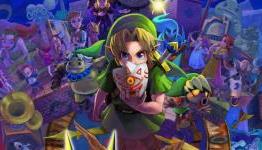 AotF: Nintendo made a big push for attention at the first ever PAX South convention. Their booth was front and center on the expo hall floor, and the big game they were showing was, of course, The Legend of Zelda: Majora’s Mask 3D. The game may be a remake of the N64 classic, but it still holds a lot of surprises thanks to the enhancements Nintendo made for this release. I tried out the demo available on the floor and came away quite impressed with how well Nintendo managed to update the classic, while retaining the same feel of the original.