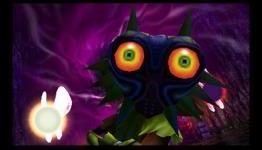 Even after 17 years Zelda: Ocarina Of Time is still widely regarded as one of the best video games ever made. In fact there’s plenty that would call it the best of all-time, which given how quickly even the most acclaimed games can age is a true testament to its greatness. But there are also plenty of people who will not hear a word said against it’s immediate follow-up, Majora’s Mask. Which even now remains one of the most distinctive and experimental entries in the Zelda franchise.