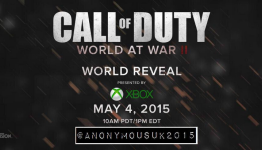 Developer Treyarch is reportedly planning to reveal Call of Duty: World at War II later this year, according to an alleged teaser poster leaked online.

Adhttps://store.steampowered.com/app/1488200/Symphony_of_War_The_Nephilim_Saga/?utm_source=n4g&utm_medium=native&utm_campaign=sow_n4g_native&utm_content=png
- Comments (105)+ Comments (105)
TopNewestOldest
Expand all
The story is too old to be commented.

Please be true!!! I need a next gen ww2 game

A WWII game is exactly the trend that the Saturated current-to-futuristic FPS trend needs to stay fresh.

I know it may sound a bit contradictory to some, but it is true.

Let the spark of the WW2 throwback be Wolfenstein. Seriously play the new order its a great game.

Wolfenstein is one of the best games out. Im having a blast with it.

Lame.. but I will be buying it anyway. Sucks when you got too much money. I end up supporting things I don't like.

Agree with you there mike. I also have been chiming for a new WWII game. If it is good I'll have no problem picking this up, but there are so, so many ways they can mess this up.

I have nothing against Wolfenstein, but don't give us that. Give us Saving Private Ryan.

This is either a fantastic announcement, or a huge disaster waiting to happen... Please don't disappoint. Read the history books for guidance instead of the last half-dozen games of the series.

I really wish they'd make a COD in Vietnam.

I think we need an all new type of FPS game like sci-fi call of duty or dinosaurs instead of the rinse and repeat crap we are getting every year.. At least Battlefields having a go at change.

Perfect game to NOT preorder...

I literally exclaimed 'oh shit!' upon reading this title.

I'm waiting for a battlefield 1944. I'd lose it if it were announced

So, they oversaturate the market with WW2 games, with dozens after dozens of them being pumped out at the end of the PS2 and into the beginning of the PS3 generation. Now they move on to "modern" war and "future" war games, and oversaturate those too...

Suddenly going back to yet another game about that same war is a good thing?

* After all these future & modern shooters, it would be good to get back to the classic WW2 setting.

* Those guns were made with less technology, and were thus, less accurate in some ways, so each gun can actually have it's own style and feel compared to the rest.

That and there was a greater variety I think as well.

Have fun with that I'm passin on COD.

It will be on 360 and PS3 though thanks to activision only caring about sales so once again the game wont be as great as it should be.. I wonder if there will be dogs? :P

Although I think this is much needed for the Call of Duty series in general....and for me, I truly think Black Ops 3.

Black Ops was a sequel to World At War so how could it go back? I would love another [email protected] game as the first one was my favorite. I wouldn't be surprised if the story stretches back to WWII and every other level in the campaign were old WWII maps or something. They seem to do what they need to tell the story.

I think this is fake though. I bet it will be black ops 3 next...plus I don't trust anything over the internet that has the name Anonymous in it....F that.

This might just make me come back to CoD. Back to the fundamentals: good map design and atmosphere. I couldn't care less about story...it's the online that has been jacked up. CoD has turned into something like you'd see on a casino video slot machine.

If this is true and they do a reveal I'll probably pass out. World At War is my favorite COD. Also, it makes sense to make a sequel to World At War as seeing Advanced Warfare could have passed as Black Ops 3 to me.

a couple of the tweets are saying "its fake :( it was on reddit a couple months ago"

OMG hopefully they keep the old guns that was in the first I used to beast in it kd over 4.3 can't wait

They'll find a way to mess it up somehow....

Not necessarially, also I'm the passive agreesive one on this site not you

You're all passive aggressive.

Wasn't an article saying Treyarch won't be releasing its COD game this year? But if this is true then great, i am so sick of those futuristic shooters.

A true new gen WW2 game would be fantastic!

Omg!!!! Please be true! WAW was my favorite COD

I didn't like the first one, but I'll keep my eye on it.

Yeah. I haven't enjoyed any of Treyarch's games. It's not the stories. It's the mechanics. They still can't seem to match what Treyarch was doing with COD 1, 2, MW, and MW2. I feel like I'm sniping the entire time I'm playing a Treyarch game.

he didn't say it was bad guys he just said he didn't like it. Different strokes for different folks. A man hasn't really liked a cod since 4. Don't think they're bad a just doesn't like online MP. A man is sure they're great for people who like Michael Bay movies OR for those who like online mp.

I'm crossing my fingers to go back to WW2

i really hope they dont at this point

Different dev making the game. Each CoD will have their own styles. Would love a World at War sequel. The voice acting in that one was amazing! Plus it was gritty. Legs and arms getting blown off. Please make a return of that!

Call of Duty is on a 3 year cycle so I would expect more Exo suits in a few years. Sledgehammer made AW so now it's Treyarch, next Infinity Ward, then SH again.

We will see more Exo movement in AW2 (assuming that's what SH game is going to be next) I bet.

That's one thing I really want to know:
IF it's Black Ops 3, will it

A) Be AS far into the future as AW?

B) Will they use the Exo movement with all the COD games moving forward?

If not, what will they do to add to the series?

Personally, I think Exo movement should be exclusive to AW, that way
1) COD can return to it's infantry based combat instead of the grasshopper thing like Infected said (so true dude)
2) Mainly, because then it can be a bit more special once every 3 years changing up the formula.

I am all for a World At War sequel. ESPECIALLY the zombie side of it. Treyarch NAILED the rusty, metallic, dirty ass world at war feel in zombies mode.

I love how we went back to square one almost...

Gamers got sick of retro (mainly World War II) shooters, so we went up to Modern Warfare. World at War comes out and gets shit on one year later. We're now abusing modern (and now futuristic) warfare game...

And now it's happening only in reverse it seems.

WWII has actual stories to tell. It doesn't have to strictly stick to America, it can tell stories of war throughout the world (italy, germany, europe, etc). So many interesting stories to translate into video-game form.

Unlike, "this guy is bad, he has drones and is bad, we must kill him." The recent COD campaigns have been forgettable. I know majority don't buy for the campaign, but I like to play the story mode for every game. WAW had an awesome campaign.

D-Day, next gen. We've seen it a few times in older video games, but it could be a crazy experience on next gen consoles.

If its not true and trey isn't making this years cod, then they clearly don't want to give us what we want. Trey makes the better cod's and a ww2 setting with zombies would be awesome.

your kidding right omfg aint enjoyed cod since waw i pklayed alot of them advanced warfare is kinda fun story mode is kool the mp is awesome one better ones.

If this is true i cannot wait, i've been waiting for call of duty to return to its original roots for a while. I personally dont like this future warfare bullshit.

Yes an need to this futuristic crap

I am down for a return to WWII

Yea, I was thinking the same thing.

But maybe the whole modern/future aspect has been done to death just as WWII was back then. So now a return to WWII is just as fresh as it was when it first was given to gamers.

With good reason they made faaaar too many.

WORLD AT WAR was a great game till it was hacked. If this is true i will return to COD games...many gamers wants a WW2 game.

I loved World at War. I would definitely be interested in a new current gen PS4 Xbox One WWII game. Unfortunately this is just speculation so far. I would like a return to the old-school type Call of Duty games.

I really think this is a possibility, I hope its the game they bring us this year, and I hope its as fun as the first one. I wouldn't mind them making HD Remakes of all the prior games from MW to Black Ops 2, with Infinity Ward on the Modern Warfare series and Treyarch on World at War and Black Ops series'. Of course if they do go the route of HD Remakes for those games it should be two bundles (same seperation as above) and all DLC included.

Microsoft brought us the Master Chief Collection, Activision should bring us a Treyarch Bundle and Infinity Ward Bundle.

I hope so i've been itching for a ww2 game for current-gen sniper elite3 and wolfenstein was as close as we got to a ww2 game ;)

I've been wanting another WWII game from treyarch for a while now. I hope this is true! I'd buy it day one!

Aaaaah crap, a COD WW2 game !? Here I was hoping DICE was doing a next gen WW2 game. Single player aside how can you have a WW2 online MP game with no tanks or other vehicles ? Gosh darn it DICE, get off you candy asses and show those hacks at Treyarch what a REAL next gen WW2 game is, you know they gonna half ass it like always.

Lol wasn't there just an article saying there WASN'T going to be another WaW?

I hope is a fake I want Black Ops 3

I want an original Call of Duty but I won't hold my breath.

This poster is fake, yes, another call of duty is gonna be revealed, we'll likely get the first teaser in April with a full blowout on it in May with a trailer and cover story on game informer, but no one yet outside of Publisher Activision, Developer Treyarch and Sony and MS know what this game is. It's first showing will be a behind closed doors to platform holders later this month or early Feb. Advanced Warfare was shown off at Destination PlayStation in Feb Last year to Sony.

Already exposed as fake months ago. A photoshop by a clickbait site.