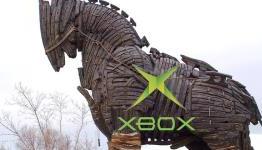 Despite a rather rocky beginning (and a rocky current), the Xbox may deserve more credit than modern fans and critics are giving it. AUTOMATON's Shehzaan Abdulla dissects the history of the Microsoft console and explains why it was so pivotal in an Asian market.

Xbox has changed gaming by pushing some major advances like: Online, western first person shooters, integrating popular apps and WRPG's all from the PC side. It also pushed alot that some see as negative, like: DLC and time exclusives.

But alas, here we are. Everyone else in the business is also doing it. So their influence is undeniable.

WOW! You are delusional and have a serious hatred for the west all at the same time. Japanese didn't have to change their game to get them on Xbox, the choose to because the look at sales of Halo, COD, KOTOR and Elder Scrolls, and decided they want some of that western money.

LOL at PS3 games being downgraded. That thing was a nightmare for developers to work on. 90% of the games were better on the 360 because it had a superior GPU with embedded esram. Being easier to work with was the biggest difference maker. You just seem very angry over what transpired last Gen. You should really be angry at Sony for the PS3, and Japanese developers for chasing the money. Your anger is misplaced and disturbing at the same time.

This was the Xbox's doing??

What? Xbox is to blame for this? A console that is barely relevant in that territory?

No proof, just B.S. Poor PC players, having to deal with consoles for all those years of downgrades...but no, its the Xbox's fault for so called 'parity'.

Because the PS3 being a pain to code for is the Xbox 360's fault right? That's why the PS4 benefits from easy to produce architecture? Or is that the Xbox's fault also?

Why did you stop there by the way? I was expecting you to lump in cancer and Ebola in negative things the Xbox introduced to the world.

I have never really understood why people say the PS3 was more powerful than the 360 as though it's a clearcut fact.

The hardware between the consoles was very different, and there were advantages to be found on both sides. But it was the XBox that quite consistently had the better looking multiplatform games through the lifespans of the 2 consoles wasn't it? The unified GDDR memory on the 360 was a pretty big advantage.

So how are people coming to the conclusion that the PS3 was out-right more powerful?

Sony put some very talented devs to work on the PS3 and got some great results, where Microsoft took a few years off of caring about the 360. But it wasn't like this gen when where the hardware is very directly comparible and one is just better than the other.

You clearly spoke the truth , these blind fanboys are getting on my nerve on how much they deny what happen last gen because of this useless brand that causes more harm than good for the entire gaming industry , anyone who see a different view than that is clearly deaf or pretending like none of that was happen last gen because of M$ , both Nintendo and M$ ruins last gen with their gimmicks and their miss management since none of them deliver or make something unique at all , they both make easy money but none of them deliver , The Wii mote and Kinect are both ripoff's from original Sony technologis .

So the 360 is still out-performing the PS3 on multiplatform games, even in year 8. No parity on the current gen versions though, so it's highly unlikely to be the result of any contract or policy.

I'm on a split mind about this. I agree that many unfavourable trends may well have been set in motion by the shift to online/Xbox, but on the other hand I can also see fault with the Japanese developers who chose to follow practices that many people hate rather than innovating around them or offering alternatives.

Timed Exclusives happened before Xbox, and DLC was a natural evolution for publishers since the price of Games never went up, they need to make extra somehow, Xbox has been blamed for these practices when they are just as much Guilty for them as Sony is

Ever since Microsoft got into console gaming, it all became a mess. Bribing, lies, holding gaming back with inferior hardware, fckd up policies, DLC, fees, DRM, timed exclusivity deals.

They have done more bad than good that's for sure.

LOL!
Western made video games has long made significant inroads into the Japanese dominated video game industry many years before the Xbox. And they are made for the original PlayStation.
But unlike the Xbox western made Playstation games not only made inroads inside the western gaming market and sold gang busters but also inside Asia and Japan like Naughty Dog's Crash Bandicoot and Eidos' Tomb Raider. These western captured the hearts of Asians and Japanese gamers translating in multi millions of copies sold there. A feat never duplicated by the Xbox.

So yeah this article's premise is really predated by the PlayStation.

Xbox is a Trojan Horse alright...like a virus that spreads inside the gaming industry destroying it from inside.

Good thing the PS4 is here to stop it.

Pretty good article, good description of the xbox origins. It's safe to say they made their mark on the industry just like Sony before it, most notable in playing games online, I think it was their focus on this that brought about how we play online today. At the same time it's hard not to notice the bad stuff they brought in too. Ms already had bad business practices so naturally they brought that into gaming too. That's not to say they are the only ones with bad practices, all companies do and good or bad the xbox brand has become a good competitor in this industry. If you look at my comment history it's clear I'm more of a ps gamer but it can't be denied that the xbox has had some decent consoles. The only problem with them is that new games stop coming after a while, hopefully that will change this gen.

Sony has been known to be very anti-consumer long before Sony or MS started making game consoles. Both companies avoided standards to push their own proprietary tech. Neither is better than the other. Just companies trying to make rich people richer, on the backs of the everyman.

Well like I said above, ms isn't the only one, but considering this is an xbox article I tried to keep from bringing in other companies as much as possible.

If there's one thing I can say a humbling asskicking and strong competition can do wonders for how pro-consumer a company is. In a roundabout kind of way Sony losing their dominant position from the PS2 days probably benefited us today.

Great article. Before Xbox western consoles were a joke following the demise of Atari. All of the big console developers were Japanese. MSFT was the 1st western console that could go toe to toe with Sega, Nintendo and Sony. In fact you can argue the 2001 launch of the 1st Xbox partially contributed to Sega's demise (PS2 was obviously the biggest factor). Much like PS4 and Xone are behind Wii U decline.

Now all the big console developers outside SONY and Nintendo 1st party are western. In fact most of the old Japanese developers are gone or are in severe financial trouble. Even most of Sony's 1st party games look and fell western.

Microsoft kills AltspaceVR and with it a piece of VR history

Microsoft has laid off entire teams behind Virtual, Mixed Reality, and HoloLens

Season: A Letter to the Future Reminds Us of the Importance of Memory-Keeping