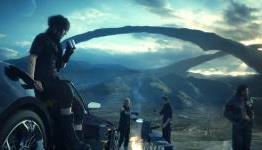 TheArabGamer said: "Square Enix have once again done the unthinkable. As many of us have probably know, the upcoming Type-0 HD would be accompenied by an exclusive demo of Final Fantasy XV which intrun added more value to the overall package. Today, Square Enix have announced that the demo codes accompanied by the game will be extremely limited and only distributed to first batch of copies."

I forget there was even a FFtype0 game announced. Not an issue for me personally because I will trade my games back and even off in cost.

Wait for the FF15 DLC to arrive. It's gonna have Square Enix written all over it, and internet will shit their pants again with overpriced Cloud skin for Noctis for the price of Dead Rising prologue.

This FF15 trial copy will be a demo of the demo.

You heard it here first.

No, they can. I want to list all of their stupid decisions this past years but i'm to tired to do that.

This is EXACTLY like them. They're so cheap it defies the laws of logic. Not saying their games are bad but IMO they always have to overcharge.

It's not really overpricing considering what you get with it,

I don't want to play a demo of a game I KNOW I'm going to play/buy on day one.

It takes away from the initial unknowing and wandering around learning everything for the first time.

* Why would you want to spoil a game for a franchise that takes forever to release games ?

The game looks great and a FFXV demo

I believe on that, because well, it's Square-Enix we are talking about.
Maybe for the rest of the people the demo will be a dlc, hooray...

So, let me get this straight:

The demo, which itself is going to be a download code, a slip of friggin paper to something which might not even be available day-one, is going to be limited to the first production run of Type-0?

FF Type zero isn't only a remake , it is a translation to.
Only the japanese players can complain about the price i think.

except it doesnt look like the psp game anymore it uses the models from the cgi scenes even , and if people were willing to fork the same amount for games that were actually released in most countries , less than two years ago ... and some with less enhancements than type 0 ... the pricing isnt surprising

Wow Square-Enix is just being a non-sop jerk lately. Getting pretty sick of them.

Do you? if you only preordered what was available back then you might not get it

I assumed this would be the case anyway, so no surprises here.

The same thing happened for first run copies of Advent Children Complete in Japan, which come with the FFXIII demo.

I think we should be glad that we are able to get it anyway. It's pretty uncommon that they give a demo with a game.

Hell, who knows? Maybe they'll release a public demo after a few months?

Exactly. I'm very happy. I've been looking forward to playing Type-0 for years, so for SE to finally decide to localise it AND give a XV demo with it...exciting times :D

I'm buying this for the FF15 demo, 8 years of waiting, sucker me foolish if it ain't worth the cash.

They just gave me a reason not to try the demo. It's a strange decision on their part. I was kind of on the fence about the game. It seems they're trying hard to convince me not to get it. I'll probabaly wait for the reviews after it releases then.

the only reason I was gonna buy this crappy game was for the FFXV demo but now? Fk it.

You would have still got the demo if you would have kept that pre order. Its in all of the first batch of copies of the game, if you pre order or buy it in store on day one or within the first week at least, you would get the demo.

Still, probably for the best that you cancelled if your entire reason for buying the game was just to get a demo for FF15 out of it.

It doesn't sound like you had the game pre-ordered anyway.

well that stinks, I will pre-order my copy now then

Since I pre-ordered I couldn't care less.
Sucks for those of you who didn't though. You have my sympathies.

The promotion is still going on, I'd imagine maybe after a month or so if people haven't bought the game yet then they'll be out of luck

Maybe, but I just don't see the use in complaining about something that was obvious from the start.

Don't fall for that crap. They just want people to pre order their game. If you get it within the first month, you'll more than likely get the demo.

Or better than that, don't buy a game you don't want just to play a demo for a game you do. Remember when demos were free to everybody who wanted to try a game before they bought it? Yeah, those were good times.
This though, I just simply can not support and I don't mean to tell anyone what to do with their money but I wish nobody else would support this kind of stuff either.
Sooner companies stop getting away with it, sooner they will quit doing it.

"Remember when demos were free to everybody who wanted to try a game before they bought it?"
No? i remember them being included with magazines though

And dont forget how they are stating that it's included in the collector .... what a great scare tactic .

Either way , i want the game more than i want the demo , so i'm not going to "work hard " for said demo

that's a good market strategy in my opinion
everyone will go buy the game 1st day
but hey the game is good,so is the xv demo

but sadly for late adopters, no demo for you guys

by the way,collector's editions is sweet

I really wish they told us this when they announced the demo
instead of disappointing many people who won't get to play it.

Like I said earlier, this is unacceptable! I HAVE WAITED for years for FF Versus/15.They releasing a demo and the only way I can play it is by me buying a game I have no interest in smh Wow!