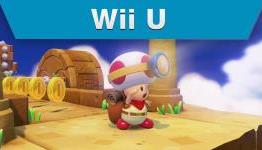 Preview-Captain Toad is Nintendo at its off-beat best | Eurogamer

Nintendo's Tokyo EAD has long been cherished for the abundance of ideas in its games, for the little novelties that bubble up in single levels of Galaxy and 3D World before being gleefully tossed aside as the developer tirelessly works its way through a bottomless toybox. Captain Toad: Treasure Tracker is a little different, though. Here's a game with one big, very bold idea at its core: let's see what a Mario game would be like with the ability to jump completely excised.

Adhttps://www.releases.com/?utm_source=n4g&utm_medium=native&utm_campaign=c1
- Comments (0)+ Comments (0)
TopNewestOldest
The story is too old to be commented.
180°2

Captain Toad: Treasure Tracker dropped to below $30 on Switch