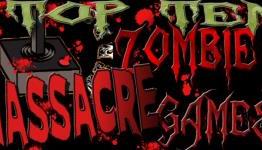 Kevin of Paranerds writes: "Awwwwwwwwoooooooo…that was the sound of a wolf and/or coyote howling in the distance. Why? Because it’s that season again. Hallowe’en, the best unpaid holiday ever. We’ve seen the Top Ten Startling/Disturbing/Scary Games, Top Ten Scary Moments in Non-Scary Games, Top Ten Creepiest Silent Hill Monsters and Top Ten Creepy Things in Gaming and after all this time we never looked at the characters in the game but rather always the genre. This isn’t about what makes a game scary it’s about Halloween’s best character…Zombies. Why zombies? Well, Zombies for some reason Zombies are big now, and I may have had my time in Toronto Zombie Walks in the past, so we love us some Zombies and know a thing or two about them. And why do we love Zombies? Because they’re a bloody good time and you don’t have to feel bad about killing them. They’re just bags of blood ready to be explodededed. So let’s take a look of the games that have you fighting on hordes of Zombies, this is the Top Ten Zombie Massacre Games. "

paranerds.com
- Comments (1)+ Comments (1)
TopNewestOldest
The story is too old to be commented.

Amazing article, love zombies so much

Best Co-Op Games of All Time Sorted By Genre

Ranking The Dead Rising Games From Worst To Best