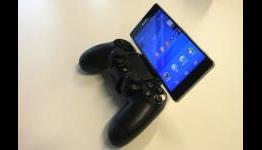 The Sony line of mobile and tablet devices, the Z2 and Z3 series, are going to offer video game-streaming/Remote Play for the PlayStation 4, Gizmodo reports. Sony already announced last month that the Z3 series would be able to offer Remote Play for the PS4, but the last generation of Xperia Z2 phones and Z2 tablets will be getting this function as well. PS4 Remote Play is expected to be a part of the Z2′s Android 4.4.4 update, which is expected to launch sometime within the next month. Since the Z2 series is only 6 months old and not much different from the Z3, we really hope the Z2 series gets Remote Play — it would save money on buying a Vita.

It's really awesome that I can use remote play on my Xperia Z2 as well but I'll just stick with my Vita. Don't want to spend $40 on a mount.

$40 for a remote play experience with true controls? I wouldnt be able to pass that up lol

My Z3 is bought and on the way.

I think I will skip this, I hate Sony mobiles.

Why would you hate an electronic device, especially one that is one of the best on the market?

My z2 is the best phone i have ever had the pleasure using.

On paper they are the most advanced phones on the market.

have u used the z2?
its a powerhouse that does aesome photos,videos,connectivity everything is great.

shouldnt the title have a question mark after it?
because its saying " we really hope the Z2 series gets Remote Play"

If only it could be used on all mobiles :(

If you can run clockwork mod you can get it

I hope the note 4 has a way of doing it, infact, im gonna have a look now.

It can be done, though it involes a load of messing about.

If your phone is rooted then its possible. Will do it when I get a mount for the thing lol

Good. As it should. Bring it to devices that can better take advantage of remote play, compared to the Vita.

Agreed.. as cool as it is on the vita i just cant mess these handhelds anymore, the cramps are annoying

Why don't they just put one of those mounts for Vita? I've seen unofficial versions.

What they should do is make a slide out gamepad for those phones and have a truly portable remote play device.

The xperia play had that and while I loved mine and still have it to play emulators there is no real good way to get thumb sticks on a slide out. Those sensor pads they had in place of them never quite worked the way you'd want them too. Now to play some old school snes or genesis it was awesome.

Yeah i had a play, is an awsome little phone, i held out for ages hoping for a play 2 but it never happend, the dpad and buttons were really good but those nub things had to go, im sure they could have used the same kinda nubs as a 3ds but oh well.... what could have been lol.

Then I guess you have no more hopes of a truly portable pocket playstation device. The Xperia play had a lot of potential, although the moronic touch pads did hold it back. I would still like to see a pocketable playstation portable powerhouse.

Can't believe people disagreed with that. Everything else about the phone was awesome. And just so you know pillsbury I've owned every playstation, 1,2,3,4, psp and I have 2 vitas. I also plan to buy the z3 soon as sony releases an unlocked version. It doesn't bother me one bit to clip the ds4 to the phone and if they find a way to get a controller built into a phone with actual sticks I'll buy that too. What I really want to know is will remote play on the z2/3 will work away from home over 4g.

same here. But I'll stick to my Vita for remoteplay ^^

don't get me wrong vita is awesome on remote play depending on game diablo,destiny work great, but shadow of mordor is god awful when using the wraith bow this would eliminate any issues i have and i must admit i would prob use this over vita as the controller is just so comfortable

I've got the original Xperia Z which came out just over a year ago, so I'm surprised that all Xperias Z models wouldn't be able to do this. It's a bit ridiculous for Sony to release so many models in such a short period of time.

The article started off saying PS4 remote play is coming to the Z2 , which I hope it is iv`e got one . Later on it says it hopes remote play will come to Z2 . So which is it ? .

Does the mount come with the phone??

Lol why would I want this?

Ok sony please tell me when can i buy the Z3 compact in the US?

I am excited by this. This is great! :D

Yup confirmed for the z2