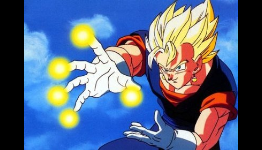 I'm so excited for this!

the characters look great, there's just something though about the gameplay, the environments and the camera angles are a little bland too... wish someone would point this out for the beta.

Looks, but doesn't play as good as it looks. Got to play the network test and the combat system is like battle of z but worst.

Didn't the original Budokia 3 come out like 10 years ago? Also why are you disappointed/upset about these characters being playable?

Shouldn't you be happy that GT may be in this? Or are you one of those guys >.> (that hate GT).

did I say I was disappointed/upset about these characters being playable?
Why would I be happy about somthing that should already be in the game?

I imported GT as soon as Z ended here in the States and hated GT. There's a reason why Dragon Ball and DBZ lasted decades while GT lasted 3 seasons.

Actually since Final Bout on the PS1 for Vegito. I have no idea why they continue to pump these games out. Been watching Dragonball Z since the early 90's and even picked up the imports of GT in the mid 90's and there's nothing left to get excited for other the the latest movie.

There's been a DB game every year so I'm not sure if why people still get hyped for these rehashes and cashins.

Then why are you here???? If you have no interest about the game, then why comment? People like YOU, are actually pathtic. Go comment on something that you actually find of interest!!!

@FlameWater "did I say I was disappointed/upset about these characters being playable?"

No you did not, but "Wow charcters that were playable since I played Budokai 3
such wow sarcasm"
can be construed as such. Besides I'm not trying to argue with you or anything, but maybe you should have explained a little more so people don't think otherwise. After all we can't read your mind and I even took what you said for what it was at face value. Then you retorted explaining why you said this. Yes I agree these characters should be in all DB games, well atleast the GT characters because they have been skipped out so much on the 7th gen consoles. And it is true that quite alot of Manga purist hate GT so as you can see; that's where my comment came from. Sorry if you felt like it was an attack on your character.

What about super Saiyan 4 Gogeta?

Might be the first DBZ game I pick up in a long time.

I personally prefer the old dragonball games style. The PS2 ones. where you fight in 2d. I don't get this qt all sorry

Damn, those screens look pretty good. Almost like the anime.

So it comes out February 5th in Japan which should be around the same time we get it too. Wow February is getting packed.