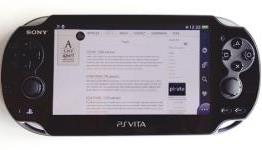 BY ACID_SNAKE: As I said in previous posts, I’m leaving behind ePSP development in favor of native vita hacking...

If you're curious yet, tentative of upgrading perhaps the best course of action is to buy two VITA's: One for hacking one to keep on a regular ofw update frequency (to keep PS+ benefits)

I am thinking of never upgrading the one I have now (past its current 3.18 fw) and then going out to buy a new one around black friday for a much lower price.

If you don't want to be involved in the hacking scene on the VITA at all, then this comment obviously isn't aimed at you. :P

Well so far all the AAA games made for it has almost all been free for PS+ members. Uncharted, Gravity Rush, Soul Sacrifice, you name it.
If you went online (on your PC) and clicked the purchase option, you basically created yourself a collection of Vita games ready to be played.

Exactly100% , playstation Mobile development was made exactly what their "wanting" to do, but of course your access to all of the PSVitas functionality is somewhat reduced and using virtual machine mode has limits.

But that is the point, the people want their cake and eat it too. Why pay a licence fee when you can get it for free right?

Why pay big costs like the other big publishers do' when you can avoid paying, because you bypass the security encryption.

Knowing full well in order to get access to that ,you do have to pay a licence fee to have access.

Ever wonder why these hackers just will not stick with Android iO.
I mean its fully open, you could strip down Android OS and make a game platform OS your self, and make 1st party games yourself but than, would than people would have no reason to bypass your security it would be free all your work would be open..right?

Silly thoughts' but not so silly when you look at what I stated is completely true, hackers do not have a stake in another companies IP, they do not have a stake in the people that these companies employ or the publisher agreements that allows certain companies the right to offer 3rd party content. Its very simple the hackers have investment stake in such IP but only for themselves. But reverse the roles and you would guess their role would not be such open to exploiting the work they do. Because I doubt very much they could prevent someone out there hacking content they provide.

Not sure what your wrote, but I think I will try and reply...

There's some framework that went on that replaced the little PSN Store symbol in the old PSP ofw (via cfw hack) and provided a homebrew storefront instead.

They didn't monitize anything obviously because the goal is to be open and have their content share and (in some cases) have code taken apart and/or add servers, levels, textures, etc. to their software.

------hmmmmm [rereading your op]------
... Oh, I see what you mean now, I think! :P (I'm just writing a stream of consciousness at this point). I guess what you meant was, "why not write for an Android API instead of hacking the VITA?". The main reason people do this is for science purposes, really. It's really philosophic too (but I wont get into that bullshit).

Basically, I bought the VITA and get some good use out of it but I know that more resources can be run from the device. From a purely mechanical design+resource perspective, there's a lot more that can be done on the device (specifically in the OS, software side). And whether or not the scene will blow-up in popularity like the PSP is another thing. Certainly, it will not be 100% like Android unless the actual Android Kernal gets flashed to memory somehow. (Wouldn't that be interesting?)

Personally, I know old faces from the PSP scene that left and where never heard from again (eg Dark_Alex). New faces that think radically and work hard. And some mainstays thinking differently.

All current hands-on-deck are great minds that invest their time+money in the original hypothesis and concept of: "VITA is a hardware that can be stripped of soft-security attached by Sony."

That's what I actually have. One Vita with the current update, and my other with the Kernal exploit, to play emulators and more PSP games on my Vita.

The only things I ever liked about PSP getting hacked was the fact that I could play all my old GBA, GBC, SNES and N64 games. Other than that I had bought all my games. I found out about it too late anyways. :P

I know it's inevitable, but I really hope the Vita doesn't get hacked too easily. I loved my PSP before it got hacked, then the games just stopped being made for it thanks to the rampant piracy and I don't want the same to happen to the Vita now that it's getting the attention it deserves.

Why can't we just have nice things?

What kind of attention?

I was thinking more the 'look at these hundreds of titles from big studios in Japan that are finally coming to the west' attention.

The AAA games are there and still being made, but it will all stop if the native hack is made.

The hackers are going to kill the Vita with this. I hope everyone realizes that developers will be afraid to make games for the Vita now. It's still the best handheld ever made.

Yeah, 'cause the Vita is doing so great right now
/sarcasm.

If it ends up being hacked, people will use hacking as an excuse for the lack of success of the Vita, forgetting that it had run for more than 3 years without being hacked, and that support had already been massively lacking then.

Except for all the support it's getting now, you're right.

But who cares if no new games come out, so long as elnacho gets his old crap, right?

Say what you want, the lack of success and support of the Vita has nothing to do with hacking/piracy, but if piracy ever hits the device, people will forget about this, and blame the poor support and poor sales on piracy. The truth, however, is that the device is just a niche product for ps4 owners. It might be a great device, but it will not get support with such a relatively small user base.

@elnacho
Yes, the vita is not doing that well but is it an excuse to have it hacked so that it would go the way of the PSP? Regardless of how successful it is, there are people out there who are willing to go and buy a Vita. Why not let those people enjoy the potential games that is actually made for it? How is it hurting people who are not buying it? Currently there are 8 million vita adopter, so its ok to let hackers ruin the 8 million who enjoyed their PS Vita?

kayoss: I never said it was ok. People are putting words in my mouth. The only thing I said was that people *will* blame piracy if it ever happens, forgetting that the vita wasn't doing well in the first place.

The truth is, nobody has a clue of the mid/long term impact of piracy on a device, yet gamers will always blame it if they have the opportunity. I call that being brainwashed by the industry.

The Legend of Heroes: Trails of Cold Steel II Getting Altina Orion Figure by ques Q

SEASON: A letter to the future Is Already One of 2023’s Must-Play Titles