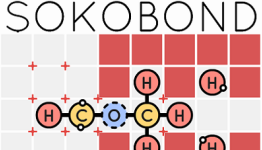 GameGrin's Ruth Krabacher writes: "While education and gaming are not as far apart on the spectrum as some concerned parents’ groups would have you believe, they’re still not exactly cozy with one another at the best of times. As part of the generation that got some of the first “educational” games in primary school—which often seemed to have more emphasis on educational than game—I’m admittedly a bit suspicious of anything that tries to teach me through games. And admittedly, Sokobond doesn’t make that claim, but it does fall in that same arena."