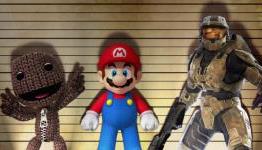 Nearly a year in, is anyone winning the current generation console war?

Ever though I own a Xbox One and Wii u I would have to say the PlayStation 4 is winning this war so far. PlayStation made a nice system.

true battle?? nothing will change ps4 will outsell x1....

Could be a rough generation for Nintendo we will have to see how that pans out for them. Sony always does fine. Microsoft always takes last place but have the best consoles. Both Microsoft and Sony are doing better than previous generations at this point in the lifecycle, gamers are winning.

I did buy a Wii U but it sat in its box for a month and I decided it was a bad decision for me to buy so I took it back. Definitely satisfied being a PS4/X1/PC gamer, though I need Sony to announce some better stuff. I'm not a big fan of their most popular stuff, but love SOCOM. H-hour looks sweet too but I'll get PC on that I thonk

In terms of sales, the PS4 is winning and probably will dominate for the rest of the console cycle.

In terms of which console has better games however? That is subjective and the race is much more closely fought.

The real battle between Wii U and Xbone will start next year. Wii U releases/released its two biggest franchises this year; Mario Kart and Super Smash Brothers. Meanwhile, Xbone hasn't even released a Halo yet.

PS4 is selling more software than *fill in this blank*

I own all 3, Id say Im winning the console war lol

That sounds about right :)

Let me show you a quote . “History has shown us that the first company to reach 10 million in console sales wins the generation battle. We are uniquely positioned to set a new benchmark for the industry.” (tricky) Don Mattick

Sony has already won is gen . Also PS4 has to many advantages over x1. PS4 is more powerful than X1. That meaning that the PS4 version of multi platform games will always be superior vs X1. Last gen the power difference between 360 and PS3 was closer than PS4 vs X1. Last gen 360 had a slightly better GPU than PS3. But PS3 had a far superior but hard to program CPU vs 360. This gen PS4 hardware is superior in every way to x1. More powerful GPU , faster memory system architecture and ram same CPU . Less O.S on the PS4 than X1 that slowed down the CPU on x1.

Parity is only possible if .

A. The game is not that graphically demanding and both PS4 and x1 have hardware head room to run the game at it's full resolution and frame rates.

B. The developer gimping the PS4 version for the sake of parity. The PS4 has 50 % more GPU cores. PS4 vs X1 both GPU benchmarked by digitalfoundry PS4 GPU has a average of 30% performance advantage.

Xbox fans will say PS3 caught up to 360. yes worldwide . But not in North America. Also Sony is a big gaming brand worldwide than Microsoft. Sony also had more 3rd party exclusives last gen than 360.

One of the biggest mistake that Microsoft made in my opinion. Was to drop kinect . Microsoft killed kinect with that move. Kinect was the one advantage that x1 had over PS4. Microsoft should have taken the hit. Sold x1 for the same price point as the PS4 with kinect. That would have made it a better value proposition against PS4. People would see x1 came with a camera and PS4 didn't. Microsoft thinks that kinect was the biggest problem. No x1 weaker hardware is the problem .

Wiiu is a great console for first party exclusive games. But the lack of 3rd party multi platform support will limit the sales of wiiu. This makes wiiu a secondary game console purchase.

"Let me show you a quote . “History has shown us that the first company to reach 10 million in console sales wins the generation battle. We are uniquely positioned to set a new benchmark for the industry.” (tricky) Don Mattick"

He was wrong though, or did Wii get to 10 million first and PS3 get there second…?

its still not too late to trade in those systems and get PS4...just saying.

• got the casual gamers

• more horsepower - Horsepower, it's not a car??

• better controller - nope, just not true, worse battery life, slippery thumbsticks, horrible start button, The Xbox One controller is the comfiest and most efficient controller i have ever used, the Triggers on my PS4 one will go soon because it has to rest on them when i put it down and the added features like the light bar and fun but unnecessary Touchpad do more damage than good.

• The Hobbit films have made billions up to now and the last one will most likely get a billion too, that doesn't mean that The Hobbit it a good film, sells doesn't count as a good thing but it does count as winning something.

Horsepower - You know what he meant and he's right.

The Hobbit films are a bad analogy. They aren't involved in any generational battle within the film industry. They are a prequel to a trilogy that was already a huge money maker.

The PS4 is definitely leading the pack and its performance in sales and software will continue to improve leading into the holidays. ;)

I would say the Ps4 is the system of choice for most gamers this year. Personally, I am enjoying my wiiu over my ps4. Smash bros later this year, Mario Kart 8 + DLC, Hyrule Warriors, and Bayonetta 2. Pretty decent lineup in my opinion. On the other hand, ps4 have some really huge titles coming this year and especially next year. Starfox on wii u can not compete with Uncharted 4 (hopefully 2015 holiday) as the game of choice

Smash bros is going to be great.

Your comparing Starfox to Uncharted next year???? How about comparing it to Xenoblade Chronicles X or Zelda U?

In terms of gamers I don't think anyone is winning yet. Not enough exclusives on each platform. But if I had to pick one then it will probably be Nintendo due to Mario Kart and Super Smash Bros. In terms of sales then there is no doubt about it Sony and I think they deserve to be where they are in this so called "war/race".

The only "war" is being fought by fanboys on whatever side they choose over a piece of plastic that plays games.

Real gamers dont care who has more sales. Real gamers care about games and what THEY like to play. If you can afford all 3, take the plunge and enjoy what you enjoy. Let the fanboys be trivial over the consoles.

This guy likes Microsoft's exclusives more. I feel like he could have saved a lot of time and just told us that.

The WII U has won really. Nintendo don't deal in faux exclusivity like Microsoft and Sony. Super Smash Bros is coming, it looks terrific and will be a successful system seller, i will probably buy a WII U for that game alone, on top of that you have a plethora of great games coming out for the WII U soon, Zelda anyone?

Your logic is sound, but people were banking on MarioKart to be THE system mover. Now it is SSB. Personally I think Ninty is doing fine, but I dont think they will luck out with a true system-seller like they did with the Wii. Nintendo has lots of great games, just not a silver-bullet entry yet.

NPD says it's PS4. Don't flip enjoy6 what you have.

Nice article. It's all about the games. Halo Mastercheif collection is enough reason to upgrade this holiday season.

No gamer is a winner you don't have shares in these companies.

You enjoy whatever you want. Playstation has sold the best if that's what you call winning.

How do you know who does and doesn't have shares in a given company?

The winner has ALWAYS been determined by who sells the most consoles. Xbox supporters tried to change that narrative last gen, turning it into marketshare- where the winner still would have been Nintendo- but the true winner of the console war is the company that sells the most hardware.

I remember some Sony supporters saying how they don't play sales, they play games.

I like how you are all interested in sales even though last gen it was the furthest from your conversation.

What Artemidorus is saying and what you were saying when you were Hicken not to long ago is gamers shouldn't care about sales and people should enjoy what they want.

PS4 is winning, and will most likely win by a significant margin.

Although not a kinetic fan, i believe that unbundling the kinetic is a mistake. This allows the x1 to semi-lose the one distinguishing feature to the ps4. Yes i know ps4 has a camera too, but it really pales in comparison to the kinect 2. Ms should have done what Nintendo n Sony did for the Wii u n ps3, work harder to come up with the goods and make Kinect worth the support. Unfortunately they dropped it.

On the other hand ps4 will most likely see VR next year. This would give ps4 way more wow power than the x1. Although x1 also has vr in development, it will probably come some time after the sony launches their vr, by then the wow factor would have diminished somewhat.

Also x1's failure in Japan will likely result in Japanese developers favour ps4 overwhelmingly. This will most likely affect x1 sales not only in japan but in many Asian territories also. China, hk gamers appear to like Japanese games.

Having said that i don't think x1 is a failure. It's just not as successful as the ps4. Nothing really wrong with that imo. This could also entail that it is more likely that ms will launch the next console significantly earlier paving way for a stronger next gen Xbox.

If you have to ask that question you're not paying attention.

Agree 1Disagree 0
▼✖-+
SPAMInappropriate
Show all comments (46)
The story is too old to be commented.
70°