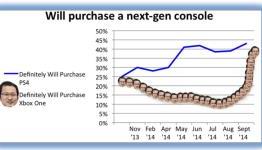 Xbox One Released In Japan To Overwhelming Number Of Person

AUTOMATON's Peter Martin reports on September 4th, 2014 - the day that will go down in history thanks to the occasion of the grand launch of the Xbox One in Japan, which caused millions of people to rock the island nation with a resounding "Oh, the new Xbox? Is that coming out or something?"

That title made me LOL

The picture is even better. LOL

The entire article made me laugh. I honestly thought MS was trying to at least compete with it's own consoles over there. Good thing they're making all of those Japanese games :/

I think they've lost quite a decent chunk of money now in Japan with all the localisations, marketing and such.

Lol this hilarious. How much did M$ spend to roll out the xbone in Japan? Heads are going to roll.

Heads are going to roll? I think they spent maybe $500 dollars on some banners to hang. MS clearly doesn't care about Japan nor should they. They will be at TGS out of respect for the market but not out of necessity. After the 360 failure to penetrate Japan there was never going to be a big effort there. Its a tier 2 country when it comes to console gaming wether your MS or Sony or even Nintendo. None of them are going to sell large numbers in Japan.

@Dlacy13g shipping and handling is not free nor is it cheap. Adversing is not cheap I would imagine MS got to pay for that shelf space you know.

That launch party probably cost a bit to. Then how many consoles have they got over there that is just sitting on shelves? So yer it costs a little more than $500 lol. Am not talking billions here. But a good few million at least.

@ocelot07 A couple things... one it costs MS nothing to have consoles on shelves. Those consoles are ordered by the retailers to stock and paid for by the retailers. Ship backs would cost MS money in terms of RMA / refunds but that is a deal between them and the retailer so I can't speak to how that is handled there. Edit: and before you say they have to pay for shelf space...they don't, but rather they negotiate costs with retailers and things like advertising space or dedicated locations are all worked out in that negotiation. MS, Sony or Nintendo don't wrtie checks to Best Buy to have space they negotiate a per unit buy cost to include that.

Secondly, I was making a joke about the $500 cost. Surely they have spent more than that. But in terms of how much they actually are advertising in Japan I would venture its far less TV and probably more likely banner ads. Cost wise banners typically these days have a cpm cost of around $5 per thousand (and thats probably high for larger sites with more traffic). So doing the math for about $5000.00 US you could display 1,000,000 impressions of an ad banner on a website assuming that ad rate. Internet advertising is very inexpensive these days.

The launch party costs are far less than I think you realize especially if you look at what they did in Japan...it wasn't that much.

That all said... even if they spent a few million in advertising for the Xbox One launch in Japan...that basically is like spending $500. It was enough of a spend to say yes we did a launch but a budget that would be considered extremely small for a console launch.

But of course we all knew this was going to happen. So not that big of a deal.

Why did they even bother releasing it in Japan after the 360 sales results? They'll probably lose more than they make by bringing it there.