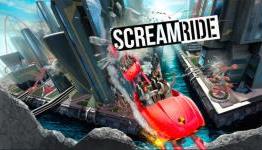 A surprise reveal during Microsoft’s Gamescom conference, ScreamRide looks a lot like Roller Coaster Tycoon thrown into a blender with Kinect Sports Rivals – and that’s not a bad thing at all. Microsoft have since revealed some more information on Frontier Developments’ quirky exclusive, detailing the game’s track-sharing capability and its three unique gameplay modes: creation, racing, and destruction.

If I'm being honest, I've never played Roller Coaster Tycoon, though I've always wanted to. And this definitely makes me want to get into the genre (especially when there are crazy physics involved)

You should try Roller Coaster Tycoon 2. It's 12 years old but still a lot of fun to play.

Theres a new Rollercoaster Tycoon coming out, I really hope it's as good as the previous titles.

Yeah this game looks really fun. It was a shocker seening this announced at gamescom but it had me interested from the start.

Not liking that 10 dollar difference in price. I hope theres some story or something

The trailer sold me on this game, I'm sure I'll get some laughs out of this title.