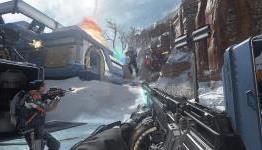 Call of Duty: Advanced Warfare; Why No Exos Multiplayer is Troubling

Call of Duty: Advanced Warfare featuring a multiplayer playlist without exos is a horrible idea.

I'm not against options

I don't see whats wrong with having the option, and although this article does make a point about the playlist eventually dying (wouldn't surprise me), it's not like they haven't removed unpopular playlists in the past. Options are always great, no need to complain and say having it there is a bad idea.

Exactly, I don't see any harm with it. Some old school CoD players might enjoy it

Plus, there are bound to be some traditionalists that just want the core gameplay without the boosting and flight. If they aren't enough to keep the playlist alive, so be it.

I guess the thing that could possibly be troubling, is that users may gravitate away from the Exo modes and onto the non-Exo modes.

In previous COD games, the less popular modes were basically unplayable in many parts of the world due to there being not enough players to play them.

It is normally TDM, FFA, Kill confirmed and Gun Game that get the most players.

Well they're advertising the hell out of the exosuits so if they're fun to play with, everything will work itself out

Seriously, the gaming media literally finds EVERYTHING troubling... It's an option...

just play the older games if you want nothing to do with exos.. ??

Activision wants everybody to move to the new titles when released, they would never suggest something like this.

I actually like the option of not using Exo's. I'm afraid having Exos means everyone is boosting around everywhere and jumping 10 feet in the air all the time like it's Halo.

It will be nice to have the standard CoD experience (I guess it's the old experience now). I have similar thoughts about the 3rd person mode, having more options and playstyles would be nice, as long as each game mode has enough players for "balanced" matchmaking.

Just hope there's enough players in the these different modes.

Wish they'd change that guys voice in the different modes he got seriously annoying in that capture the flag demo,but the options choices I see as a plus not a disaster,If sledge hammer wants to give COD players across the board something they like and want to play then what's the problem.

It's not a bad things. Options are a very good thing in video games. If most of the community flocks to that playlist though, it will fucking suck. But that that would be the communities fault.

Options are good and all, but I just don't want TOO many options.

All of the previous COD games just seemed like they had way too many modes, which resulted in about 75% of them being unplayable because there wasn't enough players in my region. I don't want to wait 30 mins just for one lobby.

Having the option is nice. In Crysis 3, there was a no suit mode, it made the game very different and the meta-game was very interesting. Without the powers of the suit, you began to think differently and worry more about getting blindsided. Admittedly, having a no Exo mode in AW might attract people away from the core mechanics of the game and drag people back to COD's old gameplay, but there's nothing wrong with a classic mode for people who want the option. So it's all good

It stretches the player base, so yes, more options IS detrimental to the experience when looking at the long run. The game is built around these features, and those that don't like the Exos have many other CoD's to play, as well as next year's Call of Duty from Treyarch.

The game has 12 modes, which is already insane. Split those up into hardcore/core playlists and you're already cutting it thin. Let's not forget, PS4/Xbox One has sold very well, but the current install base can make this troubling.

I say let those that embrace the change enjoy this outing. We haven't even gotten into the amount of bloated KD ratios from the people that can't handle the speed of this game.

I feel like only campers and MLG kids wanted this option.

The option of having both makes this game better. Games with options are always better than those without.

It's kinda weird to include this in the game in my opinion. It's like they don't believe in their vision for the game and just makes it regular CoD again.

Most likely going to be a moshpit of game modes. Most maps are built for exo abilities and I don't think non exo playlist would be able utilize the whole map. I think options are good, I just hate the fact people want something different and they get it and complain.

Call of Duty: Advanced Warfare Weapons That Should Return in a Sequel

Top 10 Call Of Duty Killstreaks Of All Time

NPD Reveals Top 10 Games by Dollar Sales on PS4 and XB1; Marvel's Spider-Man About to Get There