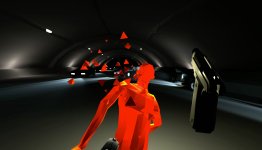 VRFocus - The developers behind upcoming virtual reality (VR) compatible first-person shooter SUPERHOT made an unexpected announcement today. The team revealed that the title, which supports the Oculus Rift VR head-mounted display, will be coming to Microsoft’s Xbox One as well. It was announced as part of the company’s Gamescom 2014 press briefing. Following that event, new screenshots of the title have been released, which can be seen below.

That's good, because I sure couldn't stand to watch more than 10 seconds of the trailer.

Seriously too annoying to persevere with.

Thank you brother! I was sitting there after work watching it on demand and I looked at my wife and asked her to kill me. Whoever was behind that trailer should be fired. Thanks, now I don't want this game at all!

I was watching the x box twitch feed. And everybody was having great craic with it super hot.

Have to agree on that, that was the most irritating game trailer ever. And i still do no t know what the game was about

the trailer was annoying but the game itself looks really great. this is strange out of all the titels ms showed there only indies that have me interested :D so much for indies aren't great. make [email protected] more accessible and bring on more of them.

For some reason i'm really disappointed that you can't see the character's hands, just a floating pistol.

As far as the trailer goes, i still forgot the name even after the SUPER...HOT....SUPER....HOT bits.