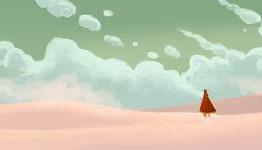 Journey and The Unfinished Swan Coming to PS4

PSBlog - Hi everyone, this is Jenova Chen, President and Creative Director of thatgamecompany. It’s been quite a ride seeing how far Journey has come in the two and a half years since its launch on PlayStation 3.

Journey will be cross buy as said in the description for trailer.
https://www.youtube.com/wat...

Journey is a great game, can't wait to replay it on PS4.
Interesting about the Cross buy. I wonder if it applies if you already bought the game when it released

Couldn't agree more, its up there with The Last of us for me! Unfinished Swan is also excellent for those that have not played it!

Good sign that Sony is happy to announce these before their conference!

Yessssssssss, just what I wanted to hear. I didn't play Journey on PS3, so this remake is perfect for me.

I am seeing that tag line more and more. I don't know if that is a good thing or a bad thing.

Well, unlike most people who complaint, I'm not forced by anyone to re-buy remastered games (yeah, believe it or not, you do have the option to not buy the game)

I'd see it as a good thing as if people are willing to replay it then it's hardly gonna be a bad game as sony have said themselves a lot of people have jumped ship so won't have played these games just had a huge backlog like myself and not got round to them, got journey just never played it, glad to hear it's cross buy tho I'll just play the ps4 version same as last of us nt played that either, start gta5 but not finished it so that'll be one I'll be happy to replay again but yeah generally it's a good thing if people want to play the games again, if they said I wouldn't touch that with a barge pole then I'd be worried ;)

One of the best games on ps3 but just one more ps3 re hash along with indies only. Having plus on ps4 is worthless. Not for free games but why have it for online when all the games are free to play to buy in game or last gen games

Looking forward to Journey too, personally I feel the Ps4 isn't needed for it, the game looked perfect as it was, smooth and buttery and art and all. But whoever missed it gets the chance now.

Excellent, i never got to play journey on PS3 due to a massive game backlog, so all good.

Cross buy! Awesome! I already own both of these for PS3, so that means I automatically get them for PS4! Just like with Flow and Flower. That's fantastic. Can't wait to play these gems again.

No mention of cross-buy?

Edit: trailer in the EU blog mentions cross-buy. This is good.

If you own on PS3 you get if free on PS4

Leaves more time for unknown stuff to be announced!

Awesome. Cross buy is there.

That's cross buy for you dude, basically a free upgrade!

It'll be just like Flow and Flower. So if you already own it, it's a freebie on PS4.

Weird, I thought older people would enjoy this more.

Cross-buy! Fantastic! :) I would have gladly purchased them again, but this is great!

Journey...2 thumbs up! And I agree with so many, it's great they announce this stuff right now...allowing the huge announcements to take center stage!

Thankfully, I will be playing Journey on PS4! Never played it!

Good news. Both are fantastic titles. If you haven't played already, do it.

I'm soo happy! I've been waiting for this too happen!!! I never got to platinum this game!

Recapturing the story: The best interactive narrative experiences in games

The Unfinished Swan Comes To Steam And Epic