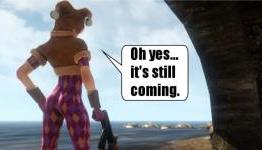 One Angry Gamer "So by now the news must have set in nice and thick about Crytek’s current situation with two of their major studios. Oh, you didn’t know? Well the company who made some of the most beautifully generic first-person shooters shutdown their internal studios in the U.S., and in the U.K, as noted in a report on Polygon. However, amidst the rubble and beneath the turmoil, away from the dust and through the thicket of war-weary smoke, one lone project still stands tall through Crytek’s financial fallout… TimeSplitters Rewind."

blogjob.com
- Comments (6)+ Comments (6)
TopNewestOldest
The story is too old to be commented.

I could have sworn this was a fan project, why would this be affected by any issues Crytek is having? I thought all they did was give their approval for the project to be made. (Which might I add is refreshing, especially when compared with Square and Nintendo who shut down anything Chrono Trigger or Pokemon related...)

Well Crytek still owns the IP, and some of the members from the Crytek UK team (former Free Radical developers) were helping out on the project.

With Crytek UK now absolved and the company moving into a publishing position and selling off Homefront to Deep Silver, it didn't seem impossible that TimeSplitters could have been axed/sold in the process.

It was a great homage to GoldenEye. I hope this Rewind thing does it justice

TimeSplitters Rewind Still In Development, Will Be Free To All At Launch