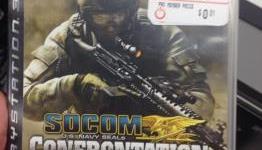 Would You Buy SOCOM Confrontation for One Penny?

JM:
"Would you purchase a game you can’t play for a single penny? Video game retailer GameStop seems to think that it is worth trying to sell to this market."

junkiemonkeys.com
- Comments (30)+ Comments (30)
TopNewestOldest
Expand all
The story is too old to be commented.

no, but i would buy a socom ps2 remastered collection for $60.00

we can only hope!

Yeah I would definitely pay for a SOCOM remaster. Easily Sony's best franchise by a long shot, too bad they've managed to ruin it.

Back to the actual question, I own SOCOM Confrontation. The game was attacked relentlessly when it appeared. Some of those attacks were warranted. However one of the big things they used to assault the game was, "It's multiplayer only"

Where is that accusation now?

How is that MP only games suddenly get a pass?

If you stuck it out with SOCOM Confrontation you know that it took a lot of patches and 6 months. But if you kept your course you know a great secret. Confrontation eventually became a kick ass SOCOM game. Plenty of people played it the first week or the first month and dropped it. But to those that stuck around you know the game, eventually, kicked ass. I am not excusing it's state out of the box. But in the same breath I will also say it evolved into something deserving the SOCOM name.

Morganfell is right. That game was the most fun I had had in a Tps in a long time after it got fixed. It was very tactical.

Yup. Confrontation turned into a much better game over time. Just as MAG did. Too bad they're useless to own now (Which I do). I'm just hoping Sony brings back SOCOM on PS4 in a big way. I'd also like a Warhawk game. The shooter market has turned into to many twitch run, shoot, kill, die, spawn games. I like the slower pace of SOCOM, and the openness of Warhawk... actually, I just really prefer 3rd person shooters. Can't wait for Star Wars Battlefront. DICE better make it 3rd person. It can have a 1st person option like the others, but what fun is it to turn into a super character, and you can't see them?

That's a remaster I'm down for!

Socom is 12 years old and still has better online features than multi million dollar games of 2014! Lobbies, User Created Ranked Rooms, able to allow or disallow certain weapon types, no explosions, and guess what?! The community back then actually voted out the scrubs who used OP weapons. Now THAT you don't see now days. If you pulled out the M203 in Socom, your ass was voted out before you even blinked.

You bring back so many memories. You are absolutely right about the m203, that shit didn't fly back then.

Wasn't the IW80-A2 another popular "noob" gun that got lots of people kicked out for using? The M14...now that gun took some time to master, at the launch of SOCOM 2 anyways.

Glitchy garbage. Why pay $60 for a ps2 game on a new console, just play your old ps2.

The reason it did so well is there were no other ps2 multi player games to play. Look at the ps3 socom games....they didn't do so hot because people had battlefield, call of duty, Killzone,.....lots of choices.....socom suffered when the fans found new games.

If Sony didn't waste their $360 million on psnow they could've kept zipper opened and made another socom AND mag.

I put in over 3,000 hours of SOCOM II. I'd pay more than 60 bucks for a simple HD version. Just give me East 19, Central 7, the breach maps, and Foxhunt all in glorious high definition and I'll gladly revisit the early 2000's on a nightly basis.

The servers are down.. I wouldn't buy any.. on top I own all except Socom 4... I couldn't dare taint my collection any more.

BTW: H-Hour is the new Socom... supposed to be S2 all over again... with some S1 mechanics.

For a collector to have it on the shelf i can see them buying it,it's just a penny.

Depends the situation. Usually if they have a trade in X and get Y bonus for preowned purchases, a store will let you have the excess credit if you make 1 purchase and 1 cent is cheap enough where I wouldn't have to bother returning it or eating the cost out of laziness.

I have 5 at my store right now. Who wants them? lol

aren't the servers shut down for that game and you can't even play it. why would you buy it? its online only....gametstop just needs to move product to idiots.

These are my favorite articles! It brings out the hardened and passionate SOCOM community members that are still holding on to a sliver of hope that the franchise may be revived and brought back to its roots. Even if SOCOM never returns, we will still have the memories and the potentially awsome H-Hour Worlds Elite to help fill that empty hole!

To answer the articles question itself...No, I would not. I would if the servers were still online though!

look up H-Hour by SOF Studios.

They're the key devs from Socom 2 backing this up...

This is the perfect game to answer bout what one writer ask bout taking single player games away, you can't give a game away if the server not up!!
I think lot of companies n gamers really need to set and think real hard bout supporting online Only, cause in the in gamers the one that gets F€€€k over

I played this game well over 2 years and over 1000 hours.

I think I got my money's worth from it. But I agree, online only games don't last forever like my other games I plan on keeping forever on my HDD.

Happy lamestop wont make any money on this game LOL..

Zipper, you ruined the Socom franchise.

You brought us the greatest shooter and in the end all you cared about were casuals who were never leaving Call of Duty. You were never true to the fans, always had poor communication and you ditched us for some adhd fps fanboys that never bought your game. Because of this, you were dropped and Socom ceased.

I don't want to hear any excuse on how it was Sony's fault. No one else seems to have a problem working for Sony, especially for a game that carried them in the PS2 era.

Confrontation was Slant 6 and given time they gave us a near perfect Socom experience for a very brief moment. They were rushed with a low budget and were rookies to PS3 development. They listened to us and added a FEW new features, but the CORE was in tact. It was classic socom refined to something a little more realistic.

The maps were great, the sound was great. It just lacked that memorable soundtrack and was plagued in the end by the biggest ps3 firmware hack. At this point slant 6 quit supporting the game, which they went longer than nearly any other dev out there, and the glitcher/hackers kept coming in. Never saw another patch, one that was needed to rid of most of the cheats from the firmware hack.

Confrontation, like other socom's, had many players and all anyone can remember from the end of each iteration is that hackers were prevalent. Hackers, glitchers, lagswitchers ruined the game and finished each one off. If that didn't seem like a problem to you most likely you were part of that problem to me.

Now we can only hope H-Hour brings back some of those memories as a few of the key guys from Zipper during the Socom 2 days are behind it making it happen. SOF Studious might be able to revive the core of Socom...

SOCOM's best days were long gone before Call of Duty ever got popular on consoles.

Games to Play if You Miss SOCOM

SOCOM Confrontation, SOCOM 4 and MAG servers shutting down in January 2014