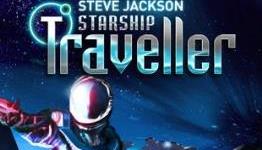 Since the inception of the Fighting Fantasy series, esteemed fantasy writer Steve Jackson has sent readers on countless journeys through dungeons and monster infested swamps. Starship Traveller was the first gamebook by Steve Jackson to introduce a Sci-Fi premise to the Fighting Fantasy series. As the commander of a Starship, the player and his crew must explore an unknown universe after their ship is swallowed by a Black Hole. During the adventure, you must explore seven hostile planets for clues that will help plot a return course home.

Adhttps://store.steampowered.com/app/1488200/Symphony_of_War_The_Nephilim_Saga/?utm_source=n4g&utm_medium=native&utm_campaign=sow_n4g_native&utm_content=png
- Comments (0)+ Comments (0)
TopNewestOldest
The story is too old to be commented.
20°0/10 Approvals