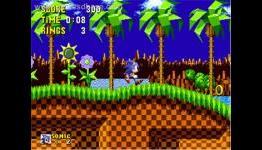 Sonic The Hedgehog for the Sega Genesis hasn’t aged well

Modern entries in the Sonic franchise aren’t the only titles in the series that are less than stellar - the first Sonic on the Sega Genesis, a game that helped define the 16-bit era of video games, pretty much sucks.

Adhttps://www.releases.com/?utm_source=n4g&utm_medium=native&utm_campaign=c1
- Comments (36)+ Comments (36)
TopNewestOldest
Expand all
The story is too old to be commented.

I still like the game, but only for nostalgic reasons. If I didn't have a childhood connection with it... well, I wouldn't touch it ever again.

I still love both Sonic 1 and 2, and they're still by far my favourite Sonic games.

I think they've aged splendidly. The design is just spot-on, love old 'fat' Sonic instead of long legs 'new' Sonic, and the gameplay and music is still fantastic.

Still looks stunning to me. The 16bits Sonic games aged very well!! almost no need for an HD version.

I agree, they've aged really well in my opinion. They have a really crisp artstyle so they look somewhat akin to the games today that are retroinspired like Shovelknight and the like.

However the author is correct about the difficulty spiking in Marble Zone. I found that terribly frustrating as a kid, and it still is today.

Click-bait article. Sonic 1 employed one of the most pretty and colorful art-styles for it's time. The same goes for Super Mario World.

You were doing so well until the first comma...

uhh what is this person thinking ?

Sonic 2 and even 1 still play better and are more appealing and fun to play than 95% of sonic games that game after it.

The only games that seem to even come close to resembling the masterpiece's that were Sonic 1&2 are the Sonic Advance games.

Everything is too fast and practically plays the game for you.

Sonic is the best. You obviously have no idea what you're talking about. You were probably like what, 2 when the game came out? Grow up.

I completely disagree. Actually I think it's one of the games that ages really well. I still play it from time to time.

Whoever wrote this should be fired.

i will say Mario on SNES aged terribly bad compared to the high colored Sonic games.

that's what i had in mind to write and the picture is called mario all star i dont know where World came from!
must be the fasting... nervermind!

The game hasn't changed, that's for sure, and that's the main thing I think is wrong with it. I feel like Sonic 2 and Sonic 3 offer vastly superior experiences, especially Sonic 2 (it's level design is awesome).

Retro sonic is the best get out of here and play your toddler easy wannabe Nintendo/disney sonic you have today.

Agreed. I like most old school Sonic games, just not the first one.

Sonic the hedgehog is a fine game. It only has one button and you can go backwards if you feel the need to (a feature not in the original Super Mario Brothers). It has a great character that stands the test of time. The music is very rememberable. The speed and movement of Sonic isn't where it needs to be, but it's a start. Sonic 2 is where the series really starts to shine.

It's not the best in the series (that belongs to Sonic 3 and Knuckles, in my opinion), but it's far from a bad game. A very good one, in fact.

Aah Sonic 3 and Knuckles, now that was an epic game! The dual cartridge feature was awesome.

What? I still have difficulty playing it lol.

This guy just sucks at Sonic. Grew up with it. Sonic 3 & Knuckles was probably the best Genesis game.

What a BS article Sonic is still a great game still often play mine, on the Mega-Drive no less.

Sonic 3 & Knuckles is the best Sonic experience of all in my humble opinion.

It's better than almost all recent ones, at least. And much better and focused than Sonic CD (which, for some strange reason, is regarded as the best Sonic game for a lot of people).

My favourite Sonic is still Sonic 3. I'm trying to hunt down a copy but it's always so expensive.

Even though Sonic helped shape my childhood, I've always considered the stages after Green Hill Zone to be a bit of a letdown. Sonic 3 had a lot more going for it in that respect.

The article contains inaccuracies that undermine their whole argument.

It says 'Star Light where things start to fall apart.
Gone are the ramps, loops and other objects that keep Sonic moving at a breakneck speed'.

Starlight Zone is FULL of loops, probably more than any other level!

The game has to be seen in the context that it was the very first game in the series. There's no use retrospectively comparing it to later games in the very same series- obviously you would hope that they would make improvements otherwise what would be the point of sequels?

I think they- and many others actually- miss the truth about Sonic. It was NEVER just about the speed. Whilst it is possible to get in to a great bouncing groove on 1 or 2 of the Green Hill Zone stages, there are often underground or through rock paths that can be chosen instead.

Marble Zone is the real indicator that Sega wanted to say 'This series is not just about speed. There's depth to it as well (if only physically)'. I like the graphics in that stage for the time.
I actually see the whole series as alternating between the dual aspects of Japanese culture- the high speed modern world and the slower, more ancient, pace of life.
Sonic on Megadrive is not close to being as fast as the Game Gear version.
To me, it was clearly always meant to be an adventure game where you can actually enjoy exploring. It was their answer to Mario remember - you still want people to actually see your level details. The going fast bit was meant to be a novelty that you do a few times in each stage.

As a massive Sonic fan i'm not really a great fan of the first game, i still think Sonic 2 is brilliant but i recently played Sonic 1 again and i didn't really enjoy it all that much.

Out of all the older Sonic games though, none of them are as good as Sonic CD.

The age limit of being a journalist writing video game articles in the 2010's decade should be 31.

Sonic the Hedgehog Can Deliver Great Sidescrollers - Without Relying on Nostalgia

Sonic the Hedgehog's Soundtrack Was a Collaborative Effort