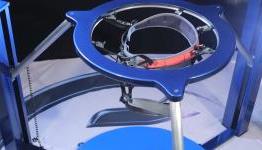 VRFocus - Cyberith, the company behind the Virtualizer motion platform for virtual reality (VR) experiences, has spent much of 2014 teasing its upcoming product. Through new videos and blog updates, the company has continually pointed towards an impending Kickstarter campaign as fan's first chance to pre-order the device. This week Cyberith has finally revealed just when that Kickstarter campaign will launch and the wait won't be too much longer.