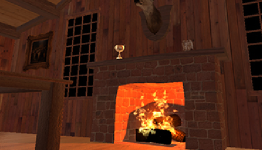 VRFocus - Much talk as been made of virtual reality (VR)'s ability to provide immersive experiences that transport players to other places. While this has meant that many focus on more intense, atmospheric and perhaps scarier videogames, others have chosen to focus on the more relaxing applications of a device such as the Oculus Rift VR headset. Recently release on the official Oculus VR Share Beta, The Fire Place is one of those titles.

Eskimos with enjoy that experience