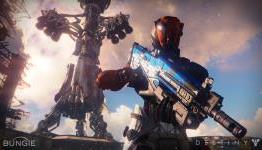 Destiny Can’t Afford Not To Be 2014s Biggest Game

''With a number of big name franchises, and a few new IPs, slipping into 2015, it leaves a number of game fighting for the crown of ‘biggest game of the year’. Even with a degree of confusion around what exactly the game is, Destiny is fitting nicely into the possibility of being 2014′s biggest release. Whether this or not this a good thing remains to be seen however.''

I'll be picking this game up. Not the collector's edition or anything, but I know it'll be fun with a few buddies

I couldnt help myself and got it :) I was in the alpha and think this is going to be one hell of a game if they follow through.

plus i think peter dinklage is the shit and plastic or not i want to hear his voice before i go to bed... dont judge me!

Lucky they are releasing it in September and not along side the Master Chief Collection, otherwise Xbox 1 gamers wouldn't bother with it.

I could see this selling 10 million plus units easily

I do not expect it to surpass COD sales. The next-gen sales might be comparable, and it may grow to become a similar powerhouse one day.

I just do not see a new sci-fi IP attracting that bafflingly large COD crowd on the first attempt.

Lol Destiny's hype isn't anything new at this point.

While they all turned out great the overhyping is what made them meh-ish at the end of the day.

It literally was fans and ESPECIALY outlets and journalist's that drove the hype train home with those games. The biggest culprit out of the bunch was TF by far.

Destiny so far could be falling in the same trap now. Activison and Sony are hyping this game so, so hard it better deliver. If not then Next gen gaming could be joke within itself.

I understand next gen is here but can we please lower these expectations a bit at least for right now.

Devs will throw all kinds of PR words our way but its up to us to temper the PR hype.

And the thing about the games you listed is they are decent in and of themselves, but the hype caused such scrutiny that people have torn them apart. If they had been released like any other game, then I am sure the community would be much more accepting of them (Hell look at Wolfenstien if need proof)

I honestly hope thats not what is going to happen with Destiny. It would kill a game with such potential before it even hit the shelf.

I actually think the reviews will be mixed. People that played Destiny and Titanfall before either was released swore Titanfall was better and more exciting. Now they're saying Titanfall was overhyped. So imagine what they'll say about Destiny after it releases? From past experience I know Bungie overhypes their games. People that never played Halo wouldn't know that about Bungie. Did you you see them last year at the 2013 E3? The Bungie reps playing the demo were so excited off of little matters. They literally were just moving the character and were thrilled. I think people are just excited because there's not many new AAA games to play right now.

I doubt Bungie and Activision are worried, as it is it's being advertised heavily for the PS4 which is a wildly popular console

Oh don't get me wrong I'm sure they're confident of success, but it hasn't got the choice to be anything but a success

Well not to many contender now is there ?

I hope it's good because I want to avoid giving EA/DICE any more money for a long time until their potential victims test their new games out for me for many months.

It will at least be the second biggest because as much as people hate cod, nothing outsells cod. I can't wait for both!

The old 360 dashboard allowed you to view the top 10 most played online games for the week. I remember looking at one point just prior to new-gen consoles coming out, and the top 4 most played games were different iterations of COD.

Even with the poor showing that was Ghosts, it will be a while until anything surplants COD in any sales chart.

I certainly expect Destiny (and numerous other games) to be better to play though.

This game will be the biggest title of 2014 without a doubt.

If you like that flavor of shooter, that is.

I will be not be getting it FH2 and Sunset with Halo means I simply wont have time , maybe next year on sale with a season pass included I will take a look.

Halo, Far Cry and... Evolve get my money this holiday season.

No pressure on destiny or anything

I might pick it up for pc eventually, after some reviews have hit.
I'm not expecting it to flop, but I don't think it NEEDS to be the best game of this year just to be successful.

Played Alpha. This is all I really care about this year. Fantastic game. Borderlands meets Halo meets Mass Effect.