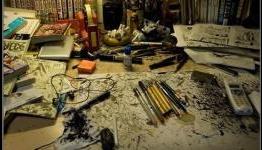 Vita Gets A Game That Allows You To Be A Mangaka

Granzella have confirmed that they are working on a Manga-making software for the PS Vita entitled, Manga Ka Keeru, nothing more has been revealed as yet. Granzella also provided a short description of what the software is about, “a game where anyone can easily have fun while creating manga.” So, here’s to hoping that this gem makes it’s way out of Japan for a worldwide release. Who’d want to get their hands on this software?

I will believe it when i see it. Don't know how this is going to work.

Based on the screen cap on the website, It uses 3d models stylized to appear as though they were manga.

But im not certain exactly how everything else will work, i suspect there will be a large quantity of predefined poses and scenes that you can mismatch to your hearts content.

Interesting concept. I'll keep an eye on this one.

I'd like to see someone try their hand at making a Rosario+Vampire type manga since Ikeda Akihisa doesn't want to work on this series anymore and please his fan base.

They need to transfer the rest of the manga to the anime or re-do it. The anime left off when stuff started getting interesting.

I'd definitely want in on this.