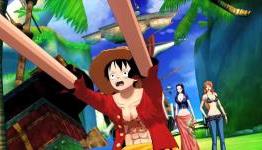 Despite One Piece: Unlimited World Red being the thirty-sixth entry, and the fifth in the Unlimited series, it is very likely that you have never encountered the world of One Piece. Based on Eiichiro Oda's shonen manga and anime series of the same name, the One Piece series is about as Japanese as you can possibly get. The game in question within this review, One Piece: Unlimited World Red, was originally released on the Nintendo 3DS in Japan last year, but is now heading to the American and European markets on the 3DS, Wii U, PlayStation Vita and PS3. Despite being complete newcomers to the series, we were excited to start our journey into One Piece.

Adhttps://store.steampowered.com/app/1488200/Symphony_of_War_The_Nephilim_Saga/?utm_source=n4g&utm_medium=native&utm_campaign=sow_n4g_native&utm_content=png
- Comments (0)+ Comments (0)
TopNewestOldest
The story is too old to be commented.
340°

Digital Games On Sale At Amazon For PS4/PS3/Vita/X1