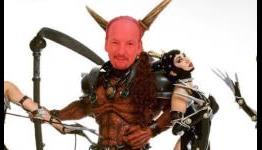 EA: Why Make Good Games When They Are Not as Profitable as Shallow, Mobile Ones?

He was speaking to stockholders what do you want him to say? His first and only job is to appease them. If he goes all we will sacrifice profits to appease the hardcore he gets fired.

It's business. Yes we don't like it but that's how it is.

IT'S P4R PEOPLE!!! Goodness nobody looks anymore! But in everyone's defense, it definitely sounds like something Moore would say hahaha!

EA, if you want great games to be as profitable as possible, try not making them exclusive to specific platforms.

That still wouldn't make them as profitable as mobile.

But would still make it more profitable. And why are you excusing this?

I can careless if they stop making games. There are plenty of studios that are passionate about games that they will make one simply to marvel over the quality. That's why I'm so thankful for a lot of the Sony studios and indie developers. Passion and quality seems to always come first.

EA is a publisher though.

He actually has a point. The downfall of gaming will be all of us "hardcore" and "core" gamers that buy nothing, complain about everything, and feel 1% of games are worth a whopping $60.

Example, Wolfenstein is a great solid game, not GOTY but fun enough to warrant the price. Sales are mediocre. It deserved more sales.

PS3 and 360 have 160 million sales between them, if a game sell 5 mill each it's considered a smashing success. While Candy Crash can make a AAA's game profit in 2 months and be made for a fraction of the cost. Business dictates that the games we talk about, are interested in, and for some reason rarely buy will be replaced by trivial games the billion 'non-gamers' love to play.

If you want our current industry to survive and develop while stemming the seemingly tide of iPhone/Android @$%%, quit hating on everything, being fanboys and buy and play more games and more types of games. Contrary to popular belief, you'd be surprised how many good games there are out there, maybe not 9/10 but definitely good and fun. I buy about 12 games a year.

Save gaming, buy a game....or be happy with F2P and mobile games.

The irony is that, with the eventual shift to cheaper more profitable mobile games, the rare "AAA" you get which, formerly would have been regarded as average, will be viewed as amazing simply because it's so rare.

The level of gamer entitlement is too damn high.

I would buy more games, but heck how many are worth the 60 price tag ? Now if Wolfstein came out for 20 or even 30 , I guarantee sales would have been triple and profits much better through volume. But new games insist on that 60 price and by the time they discounted due to low sales, it creates the enigma that the game is bad too. Games should be impulse just like mobile games. I mean you got 20 to spend, you go to gamestop and can't afford any new hot release, so you hit up the used section for something cheap thus taking away from publisher and the publisher wonders why? They need to bring down the prices accordingly. If the mobile game is made at a lower cost yet they sell at a very low price, do the same for console games when they release

It's so sad when people write loads on an article that could not be true even if it happens to be anyone's thoughts. Have you actually read it all? It's that website's attempt at humour. If Peter Moore had actually said those word his career would be over.
Now I hope that website's 'careers' are over because, as you've shown, if you don't blatantly indicate that you're making what Americans generously call a 'satire' (generous because I'd call it a 'spoof') then it is easy to take as truth. Peter Moore would have every right to ask them to take down the article.

I would gladly drop $60 for any "AAA" that's worth it, But I don't find games like generic fps worth it, or have a really short campaign. I didn't find Wolfenstein worth it, only a few hours of campaign. Games like Borderlands, Elder Scrolls Series, Fallout, or any other game that surpasses 60 hours of gameplay is a worth buy for me, they definitely are worth my $60. Main reason I rent games before buying, Bethesda are great developers, but not as much good publishers.