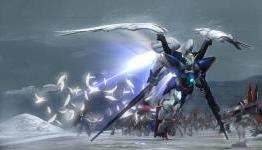 Push Square: "Let's start with the obvious: when you've just coughed up around £30 for a game only to find that there's a £24.99 DLC bundle ready and waiting on the PlayStation Store from day one, it's hard not to feel a little robbed. Sure, it's stuff that adds to the core game, but you probably haven't even had the chance to shoot down your first grunt mobile suit before hearing about the existence of this digital package. Fortunately, it seems worse than it actually is. Firstly, you have to remember that all of this DLC was released week after week in its native Japan – you're just purchasing it in bulk. Secondly, if there's anything in the bundle that you don't like the look of, note that you can buy each piece of content separately. And finally, these add-ons aren't the usual frivolous bits and pieces that Koei Tecmo seems obsessed with – there are no costume packs here."

Of course not. Tecmo Koei, as always, goes out of their way to rip off consumers.

Only the suit DLC is worth buying. Adding all the two minute, disposable DLC missions only doubles the price