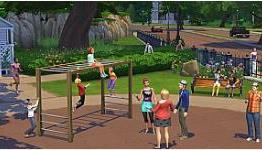 From Strategyinformer.com: "Well that's one of the weirder headlines I've written recently. Fans of omnipotent overlord simulator The Sims were dismayed last week when it was announced that the series' fourth entry would feature neither swimming pools nor toddlers.

For as EA doth say, "Upon the fourth age thy Ikea cabinets ye shall have, thy exercise bikes and spiral bookcases also - but lo! Thy tiny crawling children between the ages of one and three hath been cast right out! And no swimming pools neither."

strategyinformer.com
EA Removes Pools And Toddlers From The Sims 4 For A Reason6aming.comxNomaD

For a moment I thought they were going to say they didn't want toddlers falling into the pool....but no.

The Sims 4: Simtimates Collection Is A Huge Step For Body Positivity

State of the Game: The Sims 4 - a game of cycles that could do with starting anew

In The Sims 4, representation is a journey, not a destination