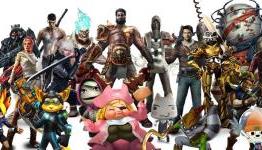 It’s been almost twenty years since Sony launched the original PlayStation into the world and since then, they have not only established themselves as major players in the video game industry, but have also introduced us to compelling characters who have captured the imagination of gamers across the globe. Therefore, to celebrate Sony’s upcoming anniversary, what better time to look at the most memorable characters ever to grace Sony’s consoles.

Confirmation that something is seriously wrong..........

Ugh... this gif hoarding is the exact reason why I left the cancerous comment sections of IGN. Just a bunch of people making the place look like an image board for upvote whores then a place where actual opinions are made.

Even though they're old you have to admit that they are funny. However just putting them for the sake of putting it kind of kills it. I love it around the time of press conferences

idk if ign does this, but here at n4g we have the amazing bubble system. read up on how it works if your that fresh from ign

Ugh...lighten up you guys. Jeez!

Can someone please tell me? That last gif, what movie is that??

You cannot call third party characters Sony characters, or else you have to include characters like Cloud or Aya Brea in the list

Just because its Sony they won't care. Bet

Kratos and Sackboy are my favorite. I wonder who would win in a fight ?

Where the hell is Gabriel Logan?!

I hate these articles that even mention Snake as a Sony character(he IS NOT!), and forget Gabe!

"have also introduced us to compelling characters who have captured the imagination of gamers across the globe" Sorry but that statement is laughable otherwise PSASBR would did better if it was indeed factual.

Sad that we didn't get to see Gabe Logan on ps3, hopefully Ps4?

Crash Bandicoot, RIP mate, you did very good and you even stood over Mario, sadly you fell off a hill which led to your death.

Agree 0Disagree 0
▼✖-+
SPAMInappropriate
Show all comments (20)
The story is too old to be commented.
50°Fresh1