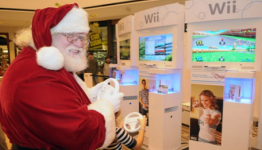 PS4 vs. Xbox One vs. Wii U: A Holiday Rematch

What a difference a year makes! Last holiday season was certainly an exciting time. Fresh off the next-gen console launches of both the Xbox One and the PlayStation 4 (with Wii U already on the market), Christmas of 2013 was both a glorious time for gamers and no doubt a nightmare for parents! Even then it was clear the PS4 was beginning its rise to the top of the heap. All three systems seemingly had a bright and vibrant future. Little did any of us know that within six months, the landscape would breakdown into pretty clear black and white terms.

PS4 will win, Xbox One and Wii U will fight for the silver medal, like usual.

"Sony possesses the well-earned advantage of planning their holiday season virtually unopposed. While the Xbox One is still a formidable presence, some have already written it off."

Exactly, people want what their friend have and that's PS4.

"There is one reason and one reason only Microsoft has a chance of posting strong sales figures by the end of the year. You already know what I’m going to say right? It’s the price drop. Period."

So people will be forced to shift to a new excuse for the Xbox One. My money is on "everything will change in September", which again, it won't.

Halo collection is going to be a nice bonus for Xbox One users. Regardless of how blind a Sony fanboy you are you can't deny that. I'm jealous I won't be able to get my hands on that set.

I'm a PS4 owner, like you, however I actually enjoy experiences found elsewhere too. I own a Wii U and will be giving it a great amount of play time with Bayonetta 2, Hyrule Warriors, Smash Bros and maybe some other games.

My PS4 will get a lot of use as well, but primarily from 3rd party games. Other than Drive Club, not a lot coming from Sony interests me this fall.

The PS4 has already won since everyday is a holiday "In terms of sales".

B.S. When Sony annouced The Last of Us; 1 game, they are considered to be a console of rehashing the same titles.
But Microsoft rehashing 4, count um, FOUR games, you praise them instead?

Lol rematch?? This is more lopsided than a Rousey and Maywether fight. We already know the PS4 will win unless the earth explodes.

@Zero-One yes, because you're getting 4 games included in one. That is an amazing package right there.

MCC collection will be the bomb... It's the first console FPS I ever played online. It single handedly taught me how to mow down foes in any other game.

343 are offering sooooo much with that bundle and it's undeniable.

Months of online including fresh ranking system (h2 clans too) dedicated servers, resolution revamps and locked 60fps (for the first time in a halo game).

I'm not sure if theatre is included but with "xbox record that" montages are sure to follow.

Just remember that these games fronted the console MLG series for years.
10 mill sold each time.

I can understand it doesn't mean much to someone who never got on with Halo. Most of the time it's because of issues with the skill gap between players. Believe me... I have seen some astounding gameplay footage of pro FPS players that would astound the average joe...

youtube.com/watch?v=_4p6P7kPG Ik Just a quick look on youtube and found this vid

Halo Collection is one of the best gaming collections to ever exist.

If that doesn't give XB1 a nice boost then I'm not sure what really will.

All 3 will sell well.

PS4 because it's PS4, XB1 because of Halo Collection & Wii U because of Mario Kart 8 & Super Smash Brothers.

We only need to remember last generation to realize how dumb it is to declare a winner so early.

It took PS3 seven years to catch Xbox 360, and neither caught the Wii. Suddenly, people want to declare PS4 the winner after just eight months.

Last generation, all we heard was:

"everything will change when MGS4 comes out".

"everything will change when the slim comes out"

"everything will change when the price is dropped"

"everything will change when Gran Turismo comes out"

While no one of those events allowed PS3 to catch the 360, it was a combination of events over a long MARATHON (not SPRINT) that allowed it to happen.

I guess some people must have just started gaming in the past year and are clueless about gaming history.

Well to be frank, after seeing the Wii take off it was considered the winner, and it did win. But that was due to the fact it was the cheapest console and it was a hit with casual and non gamers. But look at right now and the PS3 (sales almost equal to XBO for 2014) and to a lesser extent the 360 (sells slightly higher than Wii U) are still selling well, meanwhile Wii is selling next to nothing.

It's insane to compare the last generation to this one, because the roles are completely different.

The PS3 launched a year later, with a the highest price, and launched alongside the cheapest of the 3 consoles. The PS3 had fanboy and media backlash about it having no games (which was a lie, because in the first year I was playing Uncharted, Ratchet, Heavenly Sword, Warhawk, Ninja Gaiden Sigma, Motorstorm, Resistance, and more). Developers struggled to learn how to program for the PS3 which lead to badmouthing, false rumors begin spread from fanboys making fanpages on the internet, and inferior ports. And finally PSN was crap compared to XBL early on.

However, Sony managed to overcome all these issues. They got the price down, and got the PS3 slim out asap. They released many genre defining exclusives both New IP and franchises that went on to win many GOTY awards. They taught developers how to use the Cell Processor, and had many big mouthed developer humble themselves and apologize once they learned how to work the PS3. They proved the power of their console through exclusives. And they revamped PSN all generation to make it a better service than where it started.

This generation Sony has no issues, meanwhile MS and Nintendo share their blight the PS3 went through.

The PS4 has the advantage of superior multiplats early on this gen that the 360 once had. The problem is that the PS4 is truly the more powerful console, unlike last-gen where it was simply a coding issue. Also MS has a media and PR nightmare on their hands, that's going to take a year or 2 to wipe clean.

On the Nintendo side they don't have the advantage of being significantly cheaper than the Sony and MS from either side. For $100 less the PS360 offer a solid gaming experience still especially with PS+ and G4G giving you 2 free games a month on both. And on the higher end the PS4 and now XBO can offer you vastly superior hardware for just $100 more and 2 free games per month as well.

The last gen has nothing to do with this gen. And based on logic and current sales trends the PS4 is poised to win this holiday. It's already sold over 2.3x the number of XBO's and over 3.1x the number of WIi U's based on this year sales alone. And even when their big named exclusive dropped the PS4 still outsold the XBO and Wii U for that week and the following weeks WW.

It's to early to call, but unless something tragic happens to the PS4, or something truly invigorating or revolutionary happens to the XBO or Wii U then the PS4 is the likely winner of this generation, and a battle for second place underway, in which case the XBO is currently winning based on total 2014 sales, meanwhile the Wii U still has it's 1 year head-start buff like the 360 had against the competition last gen.

Wii U has more big-hit exclusives coming out for the rest of this year than the others do.
I'm banking on Smash selling circles around most everything else at that time.XD

I'm go with xbox one this holiday . I like their line up

And probably will buy a wii u on Black Friday

Already have my Wii U and I'm hoping to save up for a PS4, particularly the white Destiny bundle. :D

got a white DS4 controller on preorder. They look too good to pass up. And I needed an excuse to get a 2nd controller anyways.

The comments on this will be rather interesting.

That will be huge.

I am calling the Wii U.

With holidays there are a couple things to factor in. Price, Availability, And Games.

Black Friday the Wii U will have some nice sales, If Smash comes out it will have the better variety of games, And the fact that there will be more variety of packages to choose from.