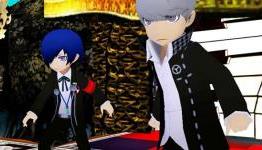 Cyrus writes : "I am a huge fan of the Persona series, so you could imagine my excitement when I heard that there was an incoming Persona game with Etrian Odyssey-style gameplay headed for the 3DS. Persona Q can be simply summed up as such; it is an Etrian Odyssey game with “chibified” versions of the entire Persona 3 and 4 cast. If you have ever played an Etrian Odyssey game before, you will know what to expect. Similarly, if you’ve played any of the modern Persona games before, you will be familiar with a majority of the characters, gameplay features and music styles found in Persona Q".

Where did the copy of the game come from because this does not come to america till November; Is this an overseas version?

Five Of The Most Emotional Moments In Video Games

8 Nintendo 3DS Games that are Perfect for Switch